THEATREGOERS are being subjected to an increased number of bootleg plays and pirated performances, it has emerged.

Police Chief Stephen Malley said: “Although people may suspect they’re viewing a knock off copy of a show, they’re unlikely to report it in case it’s legitimate awful theatre that they were just too stupid to understand.

“Theatre pirates are capitalizing on this fear.”

With such a vast range of performances on offer, the theatre pirates can be difficult to turn down.

Theatre fan Wayne Hayes said: “I was on a pub fruit machine when a guy approached me offering Chekov’s The Cherry Orchard and Mamma Mia.  I was about to tell him where to go but noticed he was also doing Juno and the Paycock so I bought in.

“The performers were speaking in what sounded like badly-dubbed German, the make-up was grainy and there was no interval.  It was terrible.”

Almost all aspects of the theatrical experience are thought to be vulnerable to piracy, including the venues themselves.

Teacher Emma Bradford said: “I was at a matinee of Faust once where the lighting made it impossible to see what was happening and there was no third act. I complained to an usher who turned out to be a cardboard cut-out. We couldn’t even leave in disgust because the exits were fake.

“Even the snacks were counterfeit. I bought my son Darren a Magnum which didn’t even have a stick. It came in a push up tube and tasted of orange. 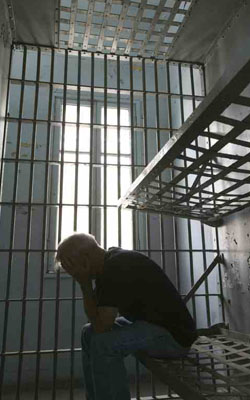 HARDENED criminals in several UK prisons have begun rioting at the prospect of sharing a cell with a Murdoch.

Burning mattresses, walls smeared with faeces and entire prison wings submerged in urine are just some of the things Britain’s convicts would rather live with than News International’s rubbish-Bond-villain bosses and their Benson-breathed part-human cronies.

Amnesty International has also intervened, asking whether listening to a News of the World editor fart in his sleep constitutes a ‘cruel and unusual punishment’.

Belmarsh governor Roy Hobbs said “Given that he looks like a failed experiment from the island of Dr Moreau, I’d have thought Neil Wallis would’ve fitted in rather well, but since he was arrested D wing has been pretty much a no-go area. And that’s where we put all the rapists, so the moral compass is all over the place, like a cheap Satnav.”

Prisoner Stephen Malley said: “Bent coppers are ten-a-penny but because of these journalists I can no longer admire the breasts on page 3 of The Sun without feeling like an accessory to evil. That makes me angry.”

Prison security will be tightened up for the delivery of half of Fleet Street, with governors expecting a dramatic increase in prisoner consumption of illicit alcohol and drugs, both from existing convicts trying to cope with the situation and because the new arrivals will look like Paul McMullan.

But it is the possible incarceration of a Murdoch or a Brooks that has the Ministry of Justice fearing prisoners will start chewing through the walls in order to escape their new cellmates.

Hobbs said “It’s going to be like an episode of Porridge, only one where Ronnie Barker is replaced with a total shitbag.”