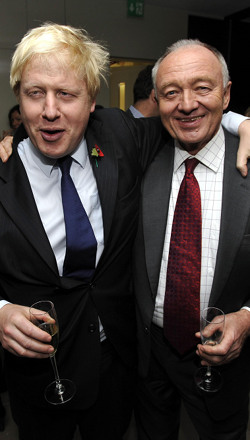 BOOKMAKERS have stopped taking bets that the next London Mayor will be a bellend.

As the competition heats up between the main candidates and Jenny Jones over who can be the most uninspiring, experts predicted the next mayoral tenure will feature significant amounts of prickishness.

Professor Henry Brubaker, from the Institute for Studies, said: “We have a bigoted oaf, an oily charlatan and a Liberal Democrat. All three are about as appealing as Nick Griffin wearing nothing but a creepy smile.

“It is now safe to assume that whoever’s running one of the biggest cities in the world for the next four years will be as much use as scented bollock moisturiser.”

Bookmakers initially suspected the influence of foreign betting syndicates in rigging the election to be so heavily prickcentric but then realised it was an absolute cast-iron prerequisite for wanting the job in the first place.

Attention will now turn to how this will manifest itself, with candidates vying for the prickiest ways of solving the capital’s traffic, homeless and stabbing-each-other-all-the-time problems.

According to William Hill, favourite solutions include ‘building three enormous domes for an unspecified reason’ (5/1), ‘making everyone within the sound of Bow Bells a Special Constable’ (3/2) and ‘something with the word ‘community’ in the title’ (evens).

Professor Brubaker added: “Luckily I already have an accumulator on it being an utterly dispiriting result, the winner saying it’s a triumph for common sense and 750 grand being spent on a logo for something to do with electric bicycles.”