WILLARD Price’s thrilling novel Gorilla Adventure has won the Booker Prize, despite being published in 1969.

The Booker jury voted unanimously for the exciting story of pubescent brothers Hal and Roger Hunt, who become embroiled in a quest to capture a mountain gorilla for a circus.

Booker jury chairman Sir Peter Stothard said: “The way he writes it, it’s like you’re actually there. But it’s more than just a thrilling story – Price shows us how the real danger comes not from the gorillas, but the hunters.

“We all agreed that nothing better has been written since Gorilla Adventure, except possibly Shark Adventure.”

Charles letters kept secret because he is obviously insane 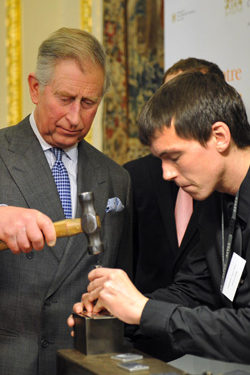 LETTERS from Prince Charles to government ministers are to be kept secret because they reveal the full extent of his insanity. Whitehall officials stressed that if the letters were to be made public, no-one would want to go near the Prince in case he tried to eat their face.

A source said: “Oh, just mental. Totally mental. He has created this fully-formed imaginary world called Franjipania where he is ‘King Of All The Badgers’.

“In one of the letters he asked the department of the environment to be careful where it ‘puts the windmills’ because they ‘might interrupt his dreamquest’.

“He told the education department to introduce ‘Shakespearean arithmetic’ and he wrote to the defence secretary ordering him to invade the Republic of Jamiroquai.”

Anti-monarchy campaigners claim Prince Charles’s interventions are a scandalous attack on British democracy, while everyone else said to lay off because he is clearly just demented and a bit sad.

The source added: “Yes he is actively trying to influence government policy, which strictly speaking, is undemocratic. But the real problem is he’s just wasting everyone’s time.”

“One letter to Theresa May just says ‘Grrrrrr’.”