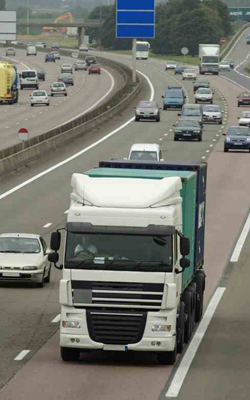 TRANSPORT Secretary Justine Greening believes there is currently some sort of legal limit to how fast Britons can go on the motorway, it has emerged.

Greening made the claim, which has shocked UK drivers, during a debate about whether this apparent top speed should be raised from its alleged current level of 70mph to some other purely hypothetical level.

“It’s one of those archaic British laws dating back to the Middle Ages, like the one that says you can shoot a Welshman with a crossbow if he’s near a waterfall. Or that you shouldn’t ‘riotously demolish a hovel’.

“Basically it is the sort of phenomenon Stephen Fry or Bill Bryson would know about. Not, however, an actual thing which can get you done in court.”

Commuter Stephen Malley said: “To the best of my knowledge the limit of my motorway speed is determined by how fast my car will go.

“Legally speaking, I understand you have to go a bit slower when there’s a police car around. Or one of those motorway maintenance vehicles that looks a bit like a police car.

“These token gestures aside, you’re good to go.”

He added: “So when they talk about increasing the motorway speed allowance I presumed they meant to put some sort of hot-rod style engine in my Corsa. A proposal which I was all in favour of.

“I was shocked to discover that is not the case. Don’t these meddling politicians understand that when you’re in a car you basically cannot die?”