Trump offers to sleep with Obama STAUNCH Republican Donald Trump has offered Barack Obama a night of unbridled passion, in exchange for the president’s withdrawal from the US election.

Trump said: “I am prepared to let Obama run his hands all over my supple body, using me as his pleasure tool. He can even kiss me fully on the mouth.

“When you love America as much as I do, you’re prepared to let handsome men ravish you as if you were some worthless medieval peasant girl.”

However the billionaire added: “He can’t touch the hair. Nobody touches the hair.” 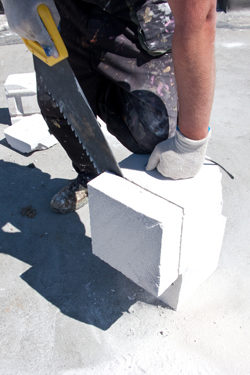 IN a bid to encourage exercise, calorific food must now be sold in packaging that weighs at least 30kg. He knows there’s a Creme Egg in there

According to new government rules, individual chocolate bars will be wrapped in blocks of solid steel. Simply removing a Twix from a shop shelf will require two people, and use four times as many calories as the bar contains.

Similarly, crisp packets will be encased in large concrete blocks with the flavour chiselled into the side.

Government health advisor Dr Emma Bradford said: “It is scientifically impossible to stop British people gorging on fatty foods, so we have harnessed that determination and turned it into a force for good.

“Opening the solid steel chocolate wrappers also requires the consumer to use an oxy-acetylene torch, thus encouraging them to develop the kind of practical skills British industry desperately needs.”

However, obese people are already trying to thwart the plan by attaching fork lifts to their mobility scooters. On arriving home they simply gnaw through the metal to the tasty chocolate within.

Confectionary fan Tom Logan said: “I’ve just picked up a Penguin and it’s given me a frigging hernia.

“Obesity is one thing, but what if the physical exertion kills me? If I’m going to die I want it to be as nature intended – slumped on a sofa in front of GMTV with my mouth full of Doritos.”