A 32-YEAR-OLD man hopes he reaches the fabled cut-off point where you stop listening to new music soon, because he has had enough of it.

Nathan Muir knows that after a certain age men simply stop bothering with any new music, preferring to repeatedly listen to the tunes of their youth, and he has told friends he is ready for it as soon as possible.

He said: “It can’t quite have arrived yet, because when I hear about a hot new band I still feel duty-bound to check them out. Even though they’re always shit.

“And when I go on about how much better Queens of the Stone Age are than anything around today, there’s still a nagging sense of perspective. I don’t have the rock-solid certainty you see in comments on YouTube.

“It’d be nice to never have to bother again, because I keep doing things like listening to the new Arctic Monkeys, so it’s doing me harm.

“It definitely needs to be over before I have kids. A father can’t be open-minded about music. What would they despise?”

Muir also asked at what age he would begin to believe a suit jacket and jeans was a stylish sartorial choice ideal for flirting with younger women, because he is basically ready now. 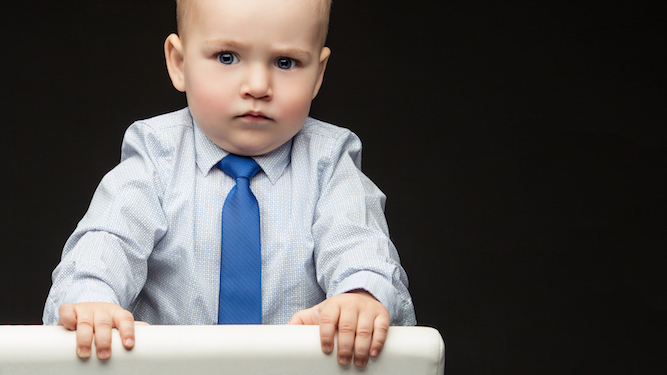 A COUPLE are preparing their toddler for adulthood by buying him a tiny grey cubicle to sit in all day, it has emerged.

Nathan and Sarah Muir saw 22-month-old Jamie playing on his toy laptop and realised they needed to stop him associating grown-up life with fun.

Sarah said: “My friend’s youngest Isabella loves playing in her little kitchen and looking after her crying doll, so she’s going to be well-prepared for the drudgery that awaits.

“But it was only when Jamie was playing at driving in his Little Tykes Cozy Coupe and wasn’t stuck in traffic beating his head on the dash in frustration we realised he hadn’t learned what he’d be driving to.

“So we’ve got him the cubicle and we’re teaching him to do basic admin in a soul-destroying fluorescent-lit workspace.

“Each day we have different games, like arse-covering, internet skiving, claiming important emails went into his junk folder and, most importantly, clockwatching.

“Once he’s done nine hours and the commute home we reward him with a couple of glasses of grape juice and an hour of Netflix.”