DID your favourite film star Kevin Spacey, and are you now swiftly changing that to something that requires fewer excuses? Don’t pick any of these:

A beautiful elegy to American suburbia or a film about a creepy middle-aged man starring an even creepier middle-aged man? On everyone’s top ten of the 90s, it’s now a movie even dedicated contrarians say is ‘very much of its time’. Wouldn’t be acceptable even if Spacey was digitally replaced by Christopher Plummer.

Another film you can’t admit liking without immediately appending that of course you don’t endorse the lead actor. Most people would rather strip naked, paint themselves blue and run through Glasgow city centre on a Friday night than try and earnestly defend Mel ‘Sugar Tits’ Gibson.

The key revelation that a soldier’s girlfriend has a dick is, in current times, a veritable pit of problematic. Gay or trans? Positive and affirming or a parade of outdated attitudes? Do you really want to have these conversations when you could be cancelled for them?

Kubrick: genius or cock? Very probably both, but apparently filming this permanently traumatised Shelley Duvall, making watching her being driven into helpless hysteria more uncomfortable than it already was on purpose, and making you a bastard for enjoying it. Unless you just like the carpets.

Gone With the Wind

The fact it’s the highest-grossing film in history aside, it’s difficult not to feel uneasy about a film that romanticises the Confederacy and makes slavery look like a cheerful romp for black characters. But aren’t Vivien Leigh’s dresses pretty?

The entire oeuvre of Woody Allen

Long gone are the days when saying your favourite romcom is Annie Hall made you look intelligent, refined and sophisticated. Now you’d look like an unrepentant creep. And whatever you do, don’t mention Manhattan.

How to lose money in just 30 minutes 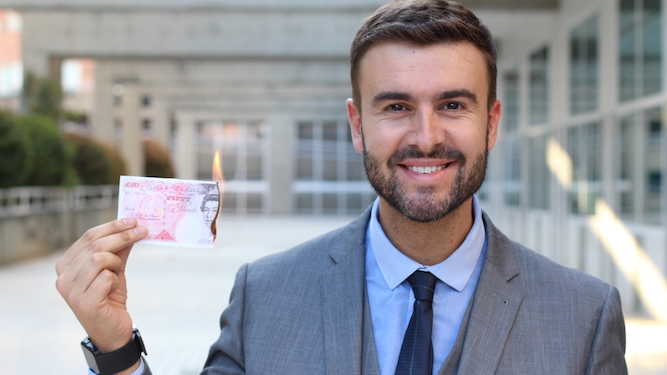 BORED during lockdown? Run out of stuff to online shop for? Try these five easy ways to lose money from the comfort of your sofa:

New apps mean everyone can play the stock market and lose money on it, just like the boys in the City. The only difference is that, unlike fund managers, the money you’ll be losing is your own. Burn through the lot shorting frozen orange juice concentrate futures in mere minutes, and reward yourself with a line of cocaine.

Spotted something on eBay selling for £140 when there’s another seller offering it for £350? Snap it up, relist it and then realise that other seller’s had it up for £350 since July 2012. Nobody knows why they do this but they do.

Take up a new hobby

Of course you’ll make good use of that microbrewery kit and 30-litre food grade fermenting bucket with airlock. There’s no way it’ll sit resentfully in the spare room for the next five years until your partner dumps you for being too crap to even make alcohol.

Tell the kids to count your spare change

Your visions of the children assiduously counting coppers in awe at how rich Mummy is lasts for an unsupervised hour, until you find discarded coins everywhere apart from all the £1s and £2s, which are gold and shiny so have been thrown in the pond.

Read a post from a guy on Reddit who says it’s definitely not a load of old toss, then excitably shove the next few month’s mortgage payments into Bitcoin. As you tell your partner, if you’d got in six years ago you’d be sitting on a gain of five billion percent by now. Soon you’ll be sitting on nothing but the floor when the bailiffs take away the sofa.