THE BBC has responded to huge public demand by spending £50m of license payers money on a piece-of-shit soap opera set in Australia.

Director General Mark Thompson said millions of viewers have written and emailed the corporation demanding a replacement for Neighbours because their televisions are stuck on BBC1.

Thompson said: "As the BBC moves, once again, into the 20th Century, we should seek out new challenges.

"At some point in his career every director general commissions a new piece-of-shit Australian soap-opera. Of course it's a gamble, but I believe Britain is ready for 25 minutes of blonde women in vests."

One letter, from 43 year-old Barbara Farnaham, said: "Dear BBC, I loved the Neighbours, they made me happy and sad.

"But since they went to that other channel I've lost my remote control. Please can you take all my license money and make another the Neighbours so I can be happy and sad again?"

Nineteen year-old Becky Plender wrote: "I likes the Eastenders but it's always so cloudy.

"Can you make the Eastenders in a hot country so they can all wear t-shirts and talk about the club and the second hand car dealership while they're standing next to a swimming pool?"

Thompson has also unvelied plans for a £75 million alternative to ITV's Emmerdale.

Starting next spring, Emmerdail will be set in a rural North Yorkshire community and will follow the sexy lives of a trio of mixed-stock farmers and they're ruthless attempts to secure approval from the Soil Association.

'Buy Me A Caravan Or I'll Steal One' Brown Tells Taxpayers 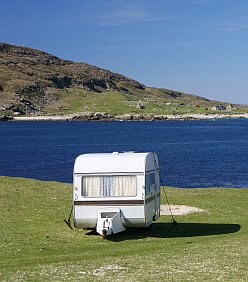 GORDON Brown wants taxpayers to buy him a new caravan otherwise he will be forced to steal one, Downing Street said last night.

The Prime Minister has called for widescale reform of party political caravan buying to ensure the system is free from any hint of corruption.

Mr Brown said: "I want quite a big one. Four berths should do. It should have a modern chemical toilet, a two-ring gas hob and a built-in fridge.

"It doesn't absolutely have to have a microwave. I'm just saying that would be nice."

Mr Brown said a taxpayer-funded caravan, "ensures I am not forced to either solicit a caravan from an anonymous private donor or just go and steal one from a driveway in Twickenham".

He added: "Because that's what I'll do, make no mistake. Without large amounts of your money, I can't stop myself from committing crimes. And even then I'm probably going to do it anyway. What the hell's wrong with me?"

Mr Brown said it was right that the police had been called in to investigate massive secret donations from a property developer who had absolutely no interest in planning decisions.

"We will do everything we possibly can to obstruct them," he added.

Meanhwile north of the Border, the Scottish Labour leader Wendy Alexander has refused to resign, claiming a wicked troll has been impersonating her in meetings and forging her signature on thank-you letters to businessmen.