THE makers of the new James Bond film have been so busy with product placement they have forgotten to make the movie.

They now have less than a month in which to make a film with breathtaking action sequences, exotic locations and a large number of expensive consumer products.

Producer Tom Logan said: “I’ve been rushed off my feet doing deals with vodka companies, so I’m going to pull an all-nighter and write the entire script tonight. I’ve already had an idea for a scene where Bond drives a car really fast with people chasing him.

“We’ve left it a bit late to get a big name director like Sam Mendes, but the guy who did Birdemic might be free. If the worst comes to the worst I’ll have to film it on my phone.

“All the insanely obvious product placement might even work in our favour, because we can pad it out with scenes of Bond checking his watch and trying on jumpers.”

However, Logan said the film’s 26th October release date did not leave time to create any of 007’s trademark ingenious gadgets, which would now consist of a compass, ladder and spear. 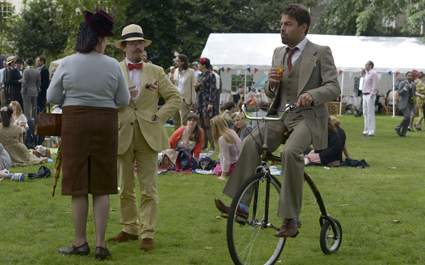 THE English are arrogant fops and the Welsh are brave, stocky underdogs, it has been confirmed.

25-year-old Australian Tom Booker said: “From the way they were dressed in safari suits and sipping cocktails, the English reeked of imperialist aloofness.

“The Welsh on the other hand looked like men of steel, forged in the furnace of oppression and burning with vengeful feelings against the foe that had gravely wronged them throughout history.”

The English delayed kick off while they finished smoking and telling each other hunting anecdotes in loud posh voices, because that is how arrogant they are.

Booker said: “Being English, they were more arrogant than a cockerel in gold trousers. But they took an early lead because they have longer limbs due to superior nutrition.

“However at half time England were cockily drinking Pimm’s with their coach Stephen Fry, while the brave Welsh huddling in their meagre underground changing room to eat nutritious leeks and sing rousing choir songs.

“Then they gave England the pasting they so richly deserved, and the Welsh rugby captain got to marry Charlotte Church and become their king.”