THE new Han Solo origin movie will tell the story of how he rescued Princess Leia from the Death Star before helping her brother destroy it.

Beginning with the space pirate landing on Tatooine, it will follow him as he meets Obi-Wan Kenobi and a young farm boy named Luke Skywalker who take him into an unwilling partnership with the Rebel Alliance against Darth Vader himself.

Producer Nathan Muir said: “The mysterious past of Han Solo, the grizzled veteran star of December’s The Force Awakens, is one of the most fantastic stories of the Star Wars universe.

“In this movie we’ll see him meet the woman he loves for the first time and his journey from buccaneer of the spaceways to corsair of justice, a twist that will surprise and thrill the fans.”

When asked if the film would contain anything new, Muir replied: “Well, there is the bisexual fuck-buddy relationship between Han and Chewbacca. 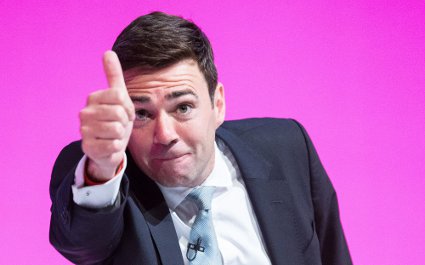 THE  Labour leadership favourite was created using Photoshop and a computer programmed regional accent, it has emerged.

‘Andy Burnham’ claims to have been born in 1970 but was in fact conceived in 2006 by a top secret group working out of Labour HQ.

His looks were designed using images of estate agency employees of the month, Kays catalogue male models and the cut-out face of a 1980s assistant coach at Sheffield Wednesday.

Seven Labour workers then had plastic surgery to become ‘Andy Burnham’, trained to do his accent and mouth scripted glossy platitudes.

Tom Booker, who worked on the project, said: “I always saw ‘Andy Burnham’ as being all things to all voters. That’s why we created several of him.

The ruse was only uncovered when some party members wondered how he could be addressing a branch meeting in St Helens while simultaneously appearing live on Channel 4 News.

Rival candidate ‘Liz Kendall’ said, “So, there are seven Andy Burnhams, Let me assure you, there are only three Liz Kendalls.”