Amid falling house prices, the looming recession and the trauma of Andrew Sachs's Penis-Gate, the country has gained some measure of comfort from the knowledge that the mind-numbingly tedious relationship seemed to have been destroyed for good.

But millions were sickened this week as the tousle-haired ginger streak of piss eagerly answered a call from that appalling woman.

Now the broadcasting watchdog Ofcom has been inundated by angry viewers desperate to know if the relationship really is over or whether they should simply wreck their televisions with a hammer.

Media analyst Martin Bishop said: "People were naturally disappointed to see the ginger streak of piss return to their screens as he indulged in a new found laddishness by spending time with a single friend, drinking beer from a can and expressing his enthusiasm for pay-per-view football matches as opposed to minority interest satellite channels.

"He remained a comprehensively awful bastard but at least he did seem to have detached himself permanently from that hellish cow.

"Now it seems the good people at BT – and I assume they are all women – would like them to get back together again."

He added: "This will ultimately lead to a mumbled proposal, an awkward wedding where nobody smiles and eventually the joyless birth of a miserable child.

"And all of this despite the fact that they obviously don't enjoy each others' company." 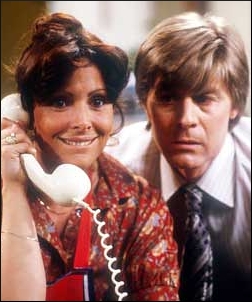 RYANAIR is to become the first budget carrier to fly passengers to New York in utter misery for less than a tenner.

The airline said the new £8 service would bear all the shitty hallmarks of a typically soul destroying Ryanair experience.

The in-flight meal will involve a catering box of Wotsits emptied into the aisle followed by an angry free-for-all.

But for an extra £10 passengers can upgrade to their own, individually wrapped, Kraft cheese single and a sachet of HP-style sauce.

In-flight entertainment will include Highlander III: The Sorcerer and episode five of the second series of Rings on Their Fingers starring Martin Jarvis as ‘Oliver’ and Diane Keen as ‘Sandy’.

A Ryanair spokesman stressed the advertised fare did not include a series of inexplicable, fake-sounding supplements which should bring the total cost to around £1,214.

Travel industry analyst Wayne Hayes said: “These days most people are happy to pay the extra fifty quid not to be punched squarely in the face as they board the aircraft.”

The spokesman added: “As the flight will involve around eight hours of unremitting hellishness as opposed to the Ryanair average of three, we will be offering a £10 cyanide biscuit.”