THE Fall frontman Mark E Smith is close to recapturing an escaped bass guitarist who has been on the run for several days.

Recently recruited bassist Roy Hobbs escaped from a 72-hour recording session by hiding at the bottom of a skip containing Smith’s empties, but has since been run to ground in a barn near Eccles.

Smith said: “The crafty bugger must have got away while I was having a fight with the keyboard player during the recording of our new single Hex Linoleum Endoscopy.

“Unfortunately for him, after 30 years of band members trying to flee I’m better at hunting people down than the Gestapo, who are a bunch of ponces who wouldn’t last five minutes in a pub fight in Hulme, by the way.

“When I catch Logan he’s got two choices. He can come back and finish the album, or he can be tied to a chair in my kitchen while I list every single thing that gets on my tits.

“That covers pretty much everything from the ancient Egyptians to not being allowed to smoke on buses anymore, so I think I know which he’ll choose.”

Smith is notorious for his troubled relations with other band members, with the 1995 album Futurist Cake Museum only being completed after the departure of 12 guitarists, four drummers and a xylophonist.

Smith said he now planned to play all the instruments on the next album himself, before digressing into a confusing diatribe linking Simon Cowell and William of Orange, both of whom were “wankers”.

House spiders must prove they are catching flies 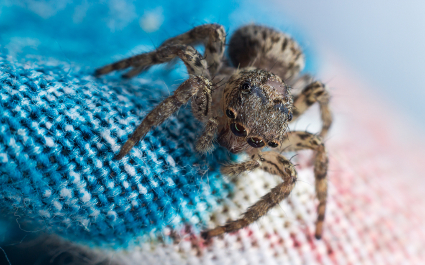 SPIDERS living rent-free in houses must provide evidence that they are actually killing flies.

Under new rules every resident spider must provide a minimum of five dead insects a week or be hit with a shoe.

“At least cats show you what they’ve murdered. Spiders just throw up a web and then nip back under the bookshelf.”

Spiders who can prove they are doing their job will be rewarded by being put under a glass sealed with a postcard and taken on a day out to Legoland Windsor.

Spider Tom Logan said: “Have you any idea how hard it is to catch fucking flies?

Joseph Turner of Brighton said: “I always suspected the whole fly-killing thing was a scam, and when some spiders presented me with some black fluff bundled up in web I knew I had them.

“They haven’t got a clue. So I’ve handed over insect control duty to the dog and the spiders are doing the ironing.”