Murder without consequence: how life was better in The Sims

LIFE an unpredictable nightmare at the moment? Here’s how it was superior when an entire simulated neighbourhood were your playthings:

You could design your own face

A typical session of The Sims began with several hours crafting the perfect avatar of yourself rather than actually playing the game, because being able to choose your own face is a pleasure that never gets old. And nobody killed your buzz by saying things like ‘Actually, your nose is way bigger than that’.

Home ownership was a piece of piss

It set a generation up for disappointment, but life peaked when you bought a two-bed house for 12,000 Simoleons. Insufficient funds for a mansion, using the cheat code ‘motherlode’ gave you the money instantly. If an attempt at making a toaster pastry burned the whole thing to a crisp and left the kitchen haunted by the ghost of your wife? You could just build another.

Have enemies? Destroy them

Four words: remove the pool ladder. They’ll be collected by the Grim Reaper in minutes, and you get to watch and enjoy their slow, miserable deaths. There’s no prison in The Sims, and therefore your pointless cruelty has no repercussions. Forget Buddhism, this is the path to true inner peace.

You could fast-forward through the workday

The Sims gave children unrealistic expectations for the nine-to-five. Pick the highest paid job, wait for the carpool, then watch the working day whizz past in about 45 seconds. Young people aren’t lazy, they’ve just grown up with an ‘accelerate time’ button and understandably find real life lacking without one.

Love is forcing two people to hang out

Want to begin a relationship? Simply force two Sims to spend time together, no matter how reluctant, and eventually they’ll become friends then lovers. Is this how it works in real life? F**k no. Is real life all the worse for it? Of course.

Whatever happened, you could reset and start over

Kids abducted by aliens? Accidentally built your house on a volcano? Toilet broken and your Sim falling asleep in a pool of piss? It wasn’t a problem in this delightful, consequence-free world. You could just log off without saving and everything was perfectly reset, ready to f**k up all over again.

Are you in a single man's bathroom? Take our quiz 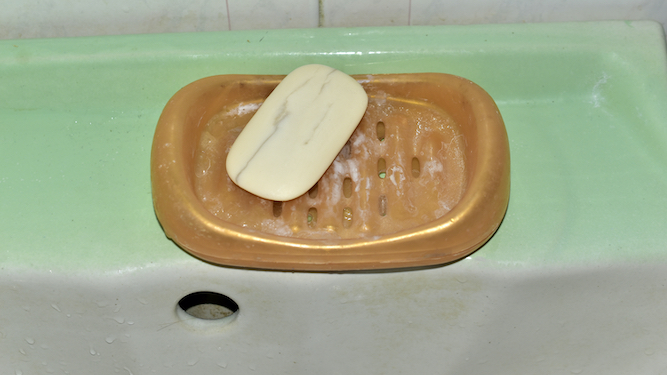 IN a bathroom? Not sure if it belongs to a single man? Take this quiz and find out.

A) There are lots of houseplants, a framed art print of an inoffensive landscape, and a glass jar filled with stones which doesn’t appear to have any use.
B) There’s a shaving mirror with grimy fingerprints all over it. That’s it.

What cleansing products can you see?

A) Several bottles of expensive shampoo, conditioner and body lotion. And that’s before you take a peek inside the medicine cabinet with its illuminated, steam-free mirror.
B) A 2-in-1 bottle of shampoo and body wash. It’s empty and, judging by the layer of dust on it, it’s been there for some time.

Is the room clean?

A) Intimidatingly so. You feel guilty for taking a shit in here, even though that’s what it’s specifically designed for.
B) It’s hard to tell. Either the grouting between the tiles was black as part of a deliberate design choice, or it’s so dirty that you’ll catch a disease just by looking at it.

A) An easy-to-use hand pump affair which smells of flowers and leaves your hands feeling clean and soft.
B) There’s a small, worn-down lump of what is presumably soap with a couple of pubes on it. It could be a dead slug though.

Is there a bin?

A) There’s a small pedal bin next to the toilet. It’s the cleanest bin you’ve ever seen.
B) No. Just a sad collection of toilet roll tubes under the cistern.

Mostly As: Congratulations, you are not in the bathroom of a single man. This place is either owned by a woman or a couple where the woman takes care of everything.

Mostly Bs: Oh dear, you are in a single man’s bathroom. Keep calm, try not to breathe in too deeply, and head for the nearest exit. With any luck you’ll be able to get out without catching a fungal infection or cholera.