CLAIMS that it would be impossible to cram the 608-page Harry Potter and the Deathly Hallows into just one film were last night believed by absolutely no-one.

Studio bosses said they would be forced to make two epic movies from the final installment because they simply could not decide which of JK Rowling’s brilliant words to leave out.

“If we could, we’d make it into 12 films, each lasting 90 minutes, released three at a time, followed by a huge collector’s edition DVD boxed-set that comes with a free hat. Just so we can remain true to JK’s literary vision.”

But 11 year-old Nathan Muir from Watford said: “Bollocks. They just want to make twice as much money.”

Thirteen year-old Molly Gilmore, from Chester, added: “You bunch of greedy bastards. I don’t mind going to see two films – it’s not like I’ve got a job – but please don’t take me for a twat.”

Meanwhile Roy Hobbs, editor of Filmings magazine, said: “Alexandre Dumas’ The Count of Monte Cristo is 928 pages long and yet the film verision somehow manged to come in at just over an hour and a half.

“Obviously I mean the proper version with Richard Chamberlain and Tony Curtis, not that stinking bag of mince with the transvestite chap from Neighbours.” 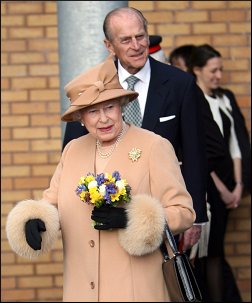 THE launch of Heathrow's new terminal building has been delayed after the Queen and Prince Philip were unable to locate the official opening area.

The Royal couple were last seen milling around the French-style cafe down the far end, staring at rows and rows of blank screens.

The Queen told onlookers: "We got here nice and early, but I do find all these signs terribly confusing. What a palaver. Do you think they'll wait for us?"

But an angry Prince Philip said: "If you're going to put a bloody sign up, it should at least point you in the right fucking direction, for Christ's sake!

"We followed the symbol for 'official opening' until we came to a crossroads, and then, surprise-surprise, nothing. They just leave you standing there looking like an arse!

"That sign has got a little train on it, right? So you'd think that meant 'railway station'. But if you follow the little arrow you eventually come to an unfinished toilet full of surly Chinamen.

He added: "As far as I can tell this is just a big shed full of perfume shops and bastard foreigners. I'm not happy."