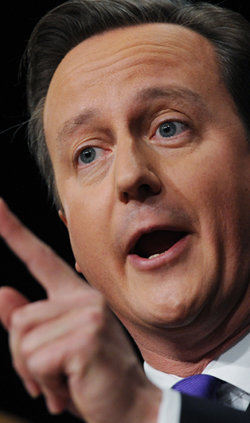 DAVID Cameron has unveiled his vision for the Little Society, consisting of the residents of Chipping Norton.

The stated aims of the Little Society are to devolve power from the state and put it back in the hands of the prime minister’s local community.

It will also include odd-job man Roy Hobbs and his wife, the Camerons’ cleaning lady.

Mr Cameron denied that their inclusion was merely token: “The Hobbs’s play a very important role. It is their job to do all the work.”

Mr Cameron said: “We’re empowering the villagers to kill anyone who tries to get in. How they do that is up to them, they could use machine guns or boiling hot chip fat.

“We’re all in this siege mentality together.”

Early casualties of the Little Society include deputy prime minister Nick Clegg, who received a fatal crossbow wound while attempting to scale the wall using a makeshift ladder made of twigs.

The prime minister said Clegg’s death could only strengthen the coalition.