THE riots which devastated 90 percent of England were just the latest high jinks mind-control stunt by cocky illusionist Derren Brown, it has emerged.

The crafty wizard has revealed he masterminded the chaos for his latest Channel 4 extravaganza Derren Brown: I Can Make You Riot.

He said: “I’ve already stolen the National Lottery and pierced Robbie Williams in the arms with a knitting needle, so the only cool thing left was to provoke anarchy. With the power of my mind.

“But of course in the midst of the destruction, the real point was to draw attention to the herd mentality of our shallow consumer culture. With the power of my mind.

“Do you want to know how I did it? Why not? Where do you think you’re going? Come back here at once.

“You are feeling very sleepy and interested in how I did it.”

Julian Cook, from Finsbury Park, said: “Derren’s trick exposed a lot of human truths. We all now realise that poor people want stuff, that Cameron wants to water cannon them directly into prison and that we all have the potential to be bad in the right circumstances. Even ballerinas.”

He added: “But I don’t think Derren has pushed communities apart, if anything he brought us together. No longer were we tweeting about where to get a good latte in Berlin and the coolest way to repair your MacBook Pro, we were tweeting about where it was all kicking off and telling each other to ‘stay safe’.

“We were literally saving lives and I’m sad it’s over.”

A Channel 4 spokesman said: “Since axing Big Brother we have been looking for something ground-breaking that would capture the imagination of the whole country and be really good telly.”

Dismissing concerns over the devastation, the spokesman added: “Are you deaf? I said it was really good telly.” 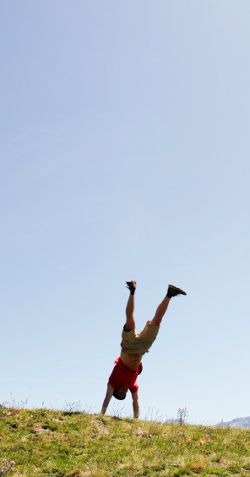 LOOKING down your nose at normal people can add 10 years to your life, say researchers.

A five-year study of the purse-mouthed has shown that 15 minutes of shaking your head and tutting at people having a pint after work for fuck’s sake will ensure you are still around to suck the joy out of a room well into your 90s.

Professor Henry Brubaker, of the Institute For Studies, said: “We also detect health benefits in not owning a television and bringing up that fact at every possible opportunity.

“We previously thought that living like an Opus Dei monk training for a triathlon was healthy because it contained none of the sweet, sweet pollutants that separate us from filthy animals.

“But it now seems that years of judgemental arm-crossing actually changes the body on a genetic level.

“It effectively removes part of a DNA sequence that controls both the ageing process and being the sort of person who gets invited to the pub for a nice, long Sunday afternoon session.”

Blood samples were taken from a landscape architect from Peterborough who cycles to work to determine what effect 20 years of feeling sorry for you, actually had done to his molecules.

When microscopic amounts of juicy pizza were added, the white blood cells immediately swarmed around them making passive-aggressive comments about empty calories until the pizza fragments slid out of the petri dish muttering the word ‘pricks’.