Rail bosses pledge to improve infrastructure of their gigantic houses

TRAIN fare hikes are vital if rail executives are to double the size of their humongous homes by 2015, it was claimed last night.

The announcement of ‘above inflation’ fare rises has left many commuters pondering whether they might soon have to sell their spleen on Ebay to fund the daily joy of standing up in a greasy metal box packed with angry armpits.

“The key infrastructural priority is to provide a 50-person hot tub on the balcony of the master bedroom. In the medium term, we’re also looking at constructing a 1920s-style music hall in the basement with full-time bawdy match girls and an organ grinder with waistcoated monkey at the entrance.

“Without these absolutely integral improvements my house is unlikely to be fit for purpose, but sadly they won’t be possible without more of your money.

“After a lengthy consultation with passenger groups, I’ve written the number ‘9’ on a piece of paper followed by as many zeroes as I could manage before my biro ran out. That should do for now.”

He added: “We would like to thank all of our customers for their compliance in this unlubricated violation and to remind them that there’s always a buffet car in coach F if they have any money left to spend on daringly overpriced cookies.”

Commuter Nikki Hollis said: “The worst thing is that it’s making me think Bob ‘the communist Sontaran’ Crow might actually be right about something from time to time.

“Next thing I’ll be fantasising about licking paté off his big domed head.” 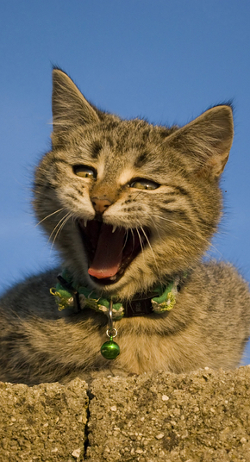 THE News International cat was at least 2,000 miles from its bag, it was estimated last night.

Mr Hackles had been struggling to escape from the bag for the last four years, but freed himself quickly yesterday after noticing a gaping hole at the bottom where the stitching had come loose.

Pausing briefly to urinate on the bag, he then pounced through an open window and began bounding athletically across the London rooftops like something out of a Go-Cat advert.

Eyewitness Tom Logan said: “It truly is a privilege to see such a magnificent animal on the move like that, doing what it was born to do.

“At one point he landed gently on a wall right next to me. He then sniffed the air and was off again with a seemingly impossible leap, but not before he glanced at me and gave me what I am convinced was a cheeky little wink.

But a News International source said: “We spent a shit load of money on that bag, so, as you can probably imagine, we’re a bit cheesed off.

“We also sacrificed the News of the World, gave Sienna Miller a hundred grand to spend on shoes and we even pretended that we think MPs are important.

“And all we’re left with is a shoddy, third-rate bag, covered in stale cat piss.”

Asked if the company would hire a firm of expensive cat retrieval specialists to return Mr Hackles to his bag, the source said: “What’s the point? That fucker is gone.

“Do you think prison will be horrid?”