Security unable to stop thousands breaking out of Wireless Festival

SECURITY staff at Wireless Festival were overwhelmed by crowds fleeing the likes of David Guetta and Nicki Minaj.

Shortly after Clean Bandit took to the stage at Finsbury Park, crowds rushed the fences in a frenzied bid to break free and return to the outside world.

Security guards tried to in vain to prevent the horde of legitimate ticket holders from escaping, with the exit stampede intensifying as Ciara prepared to take the stage.

Guard Wayne Hayes said: “It was like they were possessed, they were actually gnawing the fences. The nature of the event coupled with the fear of an afternoon appearance by Jaden and Willow Smith had turned them into savage brutes.”

He added: “As festival staff we get to wear earplugs.”

Festival goer Stephen Malley said: “I bought my ticket on the strength of the poster, which looked colourful and fun. If only I had stopped to read the words.

“At one point I ran from Avicii only to find Arrested Development playing on another stage. Out of the frying pan, into the fire.” 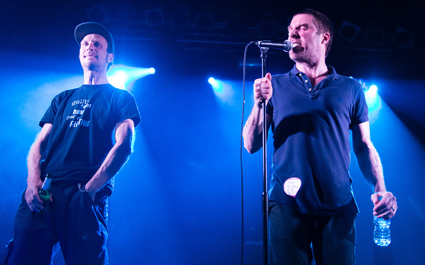 The angry former dole claimants’ unexpected honour was announced at yesterday’s royal christening, where it had been assumed that the role of godparent would be assigned to Pippa Middleton.

It is believed that the Cambridges want Charlotte to stay grounded via shouty rapping and weekend trips to hard Midlands pubs.

Sleaford Mods singer Jason Williamson said: “Naturally we are delighted. We only got into the music industry as a means of raising our social status and hopefully meeting some people who had been to good schools.

“It appears this has paid off in spades.

“At the post-christening drinks we enjoyed a lengthy chat with William and Kate – who is even more radiant in the flesh – and discussed how we would hide their daughter in our smelly studio in the event of any revolution.

“You should have seen the food they had there. Lovely bits of fresh salmon and fish eggs on these little toast things. Not a coronation chicken sandwich in sight.

“We felt so humbled just to be in that room, it was like a dream.”