THE surviving members of Margaret Thatcher’s legendary second cabinet are to reunite for a spectacular show at London’s O2 Arena.

The team, including Geoffrey Howe, Cecil Parkinson, Nigel Lawson, Norman Tebbit  and Michael Heseltine, will perform their classic material which has been repeated lovingly by every cabinet since 1981.

Tebbit has promised to ‘dust off’  his much-loved Get On Your Bike And Look For Work monologue, while Geoffrey Howe will lie perfectly still inside a dog cage for the Dead Chancellor sketch.

Meanwhile, Cecil Parkinson has said that if his hip can take it he will do his Ministry of Having Affairs.

Nigel Lawson, famous for his surreal animation, said: “With the huge cuts to public services and a massive drop in the standard of living, we hope that people will still find it funny.”

The finale will bring the entire cast together for a rendition of ‘The Bastard Song’. 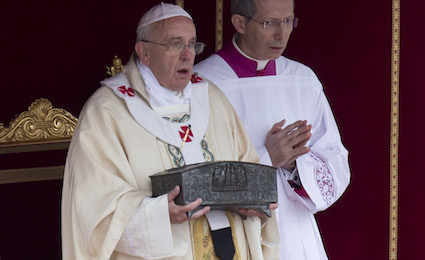 THE Vatican has unveiled the tiny coffin of St Peter for the first time.

Pope Francis prayed before the coffin yesterday in Rome and called on religions around the world to be nicer to people who are less than one foot high.

He said: “Jesus called St Peter his ‘rock’. Looking at this tiny coffin, that now seems odd. But who am I to decide who is and is not tall enough to be a Pope?”