As the X Factor’s ratings plummet, Cowell has invoked Clause 4,356,495 in the Contestant Agreement, stating that he owns ‘all their moving parts including flesh and innards’.

A SyCo spokesman said: “Just as we promised, Kye has left this competition completely transformed.

“If you thought he sounded good, he tastes unbelievable.”

X Factor meat products’ packaging is printed with the contestant’s heart-rending back story, as well as nutritional information.

In an effort to sustain SyCo revenue, hastily-organised mass auditions are being held around the country, with thousands of hopefuls queueing to be pushed into a vast, whirring grinder by Dermot O’Leary.

23-year-old auditionee Tom Logan said: “In a way it’s even better than being a pop star.

“When you’re a pie or burger, you literally become one with your fans and stay with them for the entire digestive process.”

Scotland to try not having a manager 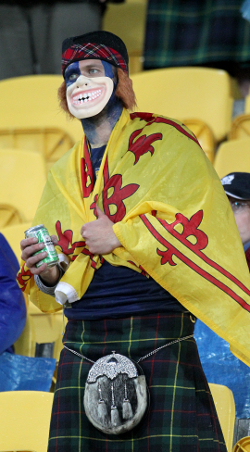 SCOTLANDS national team will manage itself for a year to see if thats any better, it has been confirmed.

Craig Levein has departed as manager following a series of results consistent with a nation of congestive heart disease sufferers huddling for shelter just off the North Sea.

An SFA spokesman said: Were going to let whoever wants to play for Scotland just turn up and start kicking the ball. We’ll leave the correct number of shirts in a pile at Hampden Park for them to fight over.

“A coach driver will be instructed to pick up whoevers stood outside the stadium at the end of the day, and to take them to international matches.

This will save an awful lot of money  Scotlands managers need 24-hour bodyguard protection from the fans who see no connection between having bloody awful players and playing bloody awful football.

It also means we can try to entice more players to join the squad by loading up the managers seat in the dugout with white pudding and fags.

The spokesman said: This may result in the national side consisting of the countrys eleven most violent psychopaths, but at least it keeps them out of the stands and theres no possible way they can be worse than Kenny Miller.