Man gives to charity without going to a f**king ball

SCIENTISTS were shocked to announce the discovery of a man who is capable of giving to charity without attending an exclusive black-tie gala event.

Nathan Muir, from Hatfield, was found to be giving £40 a month to a range of charities even though researchers were unable to detect any bids for a tennis lesson from Tim Henman.

Dr Henry Brubaker, of the Institute for Studies, said: “We detected the charity donation and began monitoring, fully expecting him to don a tuxedo and head to a five-star hotel where he would be lavishly entertained in return for his largesse.

“But instead the money simply left his account by direct debit, for all the world as if a £500-per-head ball with Lee Mack as compere was simply unnecessary.

“However we’re confident that Mr Muir is very much the exception, and that no ordinary man could possibly part with £500 a year without a special event where they get to feel like a big deal in front of women who are being paid to be there. 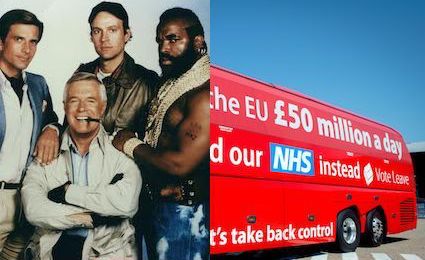 THE government’s new Fake News Unit will be like the A-Team but instead of driving a black van they will use a big red bus with a massive lie printed on the side of it.

Officials confirmed the new unit will have many other similarities to the 1980s TV show, most notably the four men who will be heading it up.

A government spokesman said: “Boris Johnson will be like Hannibal, in that he’ll be in charge despite the fact no one ever remembers electing him.

“Stephen Crabb will be Face, for obvious reasons. Jeremy Hunt will be Murdoch, as everyone is always laughing at him.

“And Jacob Rees Mogg will be BA as he refuses to get into a plane. Though this will be because he sees them as winged hell-beasts and that man was never meant to take to the air.

“And they’ve already got the bus with the massive lie written across the side of it so they’re pretty much ready to go.”