Banks ‘could be forced to keep all your money’

BANKS are to introduce a policy of keeping all of their customers’ money for themselves, they have announced.

After threatening to charge interest on deposit accounts, banks now believe it would be prudent to permanently keep all the money they have been safely looking after.

A NatWest spokesman said: “In the current economic climate it’s impossible to give customers their money back without there being less of it for us to spend on bonuses and trendy chairs.

“Therefore we’ve decided to keep all the money. We can do that automatically so there’s no fuss or hassle, and we’ll even send you a leaflet explaining it with pictures of blandly attractive people.

“I’d like to thank our customers for their loyalty over the years, although frankly you’ve got to have a bank account with one of us unless you want your employer to think you’re mental and get robbed all the time.”

RBS customer Nikki Hollis said: “Today I got a letter from my bank saying I couldn’t withdraw any money because they’d changed the name on the account to Royal Bank of Scotland.

“I’m sure it can’t be legal, but then mis-selling PPI was pretty dodgy and they just had to pay a fine for that so I’m sure they’ve got it covered.” 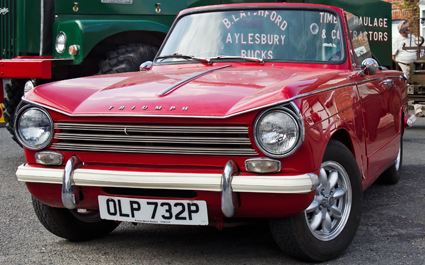 THE owner of a character-filled 1960s car is desperate for one that is comfortable and does not constantly break down, he has revealed.

Graphic designer Stephen Malley’s 1964 Triumph Herald has a timeless elegance but in technological terms makes a Ford Ka look like a spaceship.

Malley said: “The Triumph always gets admiring looks from people, but they’re not living through the daily bloody nightmare of using it as a means of transport.

“The most obvious problem is how incredibly uncomfortable the seats are. A friend gave me a lift in her Vauxhall Astra recently and it was like floating along on a massive silk pillow carried by angels.

“There’s no CD player, obviously, just a feeble radio with no presets, but it does pass the time on long journeys because you have to keep retuning it without crashing into something.”

Malley said he would like to upgrade to a “snazzy” Fiat Panda or similar, but is permanently skint due to having to buy difficult-to-find spare parts from a company in Wales.

He added: “Don’t get me wrong, I love the Triumph’s retro styling and British craftsmanship, but it’s hard to enjoy it when every trip on the motorway makes you think you’re going to die.

“For my next car I think I’m going to get one of those sporty, high-performance models that can go up hills.”