THE US dollar is now the nancy boy of the international money markets and the gayest currency in the world.

The once manly greenback is afraid to be left alone at night and has to sleep with the light on, but is still constantly wetting the bed.

It is also scared of leaving the house because the last time it did the pound and the euro laughed at it for wearing a pastel scarf.

The limp dollar said: “Can you lend me £20 until I get paid? I’ve lent all my money to some black people to buy houses and they won’t give it me back.”

Evan Davies, BBC economics editor, said the dollar was now singing an octave higher than last month because its credits had been so heavily crunched.

He said that while the pound was rugged and good at sport, the US dollar made the Canadian dollar look like Daniel Craig.

Davies added: “The international currency market is like a giant bag of spanners. If your nuts are loose it can twist them until you pant.

“But if you get threaded then those same spanners will make your pips squirm and give your cat a revolting disease. It’s as simple as that.”

Alistair Darling, the Chancellor of the Exchequer, said: “I've shat myself. Again.”

It's the beheadings I miss the most, says homesick Saudi King 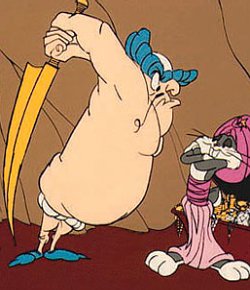 KING Abdullah of Saudi Arabia has revealed that he hates to travel because he misses the daily beheadings in the courtyard of his solid gold palace.

The King, who arrived in London yesterday to complete his purchase of the British Government, said: “Tyranny is marvellous thing, but it’s a bugger to travel with.

“I have to leave behind the Rolls Royce toilets and the beatings of women. I come to a cheap country where women do not have to wear a large canvas tent.”

He added: “Next time I shall bring Hassan the Royal Swordsman and we’ll do some beheadings in lobby of the Dorchester. Yes?”

The King, a moderniser who is slowly dragging his country into the 11th century, will be welcomed officially by the Queen.

He will then spend the rest of day sitting on a vast silk cushion in the corner of the Throne Room, breaking wind and working his way through a pair of marinated goats.

Prime Minister Gordon Brown said the King was an honoured guest adding: “You are wise and just and you have the proud genitals of an ox.