THE global surge in the price of oil has been blamed on pixies, sprites and their gang of magical woodland friends.

As the cost of Brent crude approaches $100 a bucket, international experts and the media have been puzzled by the recent price jumps.

Bill McKay, Professor of Oil Price Rises at Glasgow Clyde University, said: "Reserves are at normal levels and oil wells are not being blown up by terrorists or Americans or even destroyed by oddly named hurricanes.

"We looked at every possible scenario and were left with one unavoidable conclusion: cheeky pixies."

He added: "Supported by an extensive network of sprites, nymphs and fairies, the pixies are infiltrating stock market computers and changing all the numbers."

According to Professor McKay the creatures then run amok across petrol station forecourts changing the big price sign you can see from the road and fiddling with the pumps.

"They're ever so cheeky and naughty, while at the same time doing untold damage to the economic system that guarantees our well being," he said.

"If you see a pixie or a sprite you must catch it, put it in a jar and give it to the zoo."

Professor McKay stressed that the price rises are, "absolutely nothing to do with a bunch of profiteering shits". 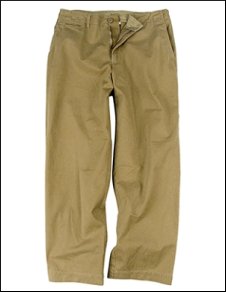 FASHION chain Gap has rejected an entire shipload of chinos produced by children in India saying the quality of the workmanship was “atrocious”.

Martha Talridge, Gap’s head of quality control, said the trousers were poorly finished, unevenly stitched and actually looked like they had been made by a child.

She said the chinos also had serious design flaws, with many being flat-fronted instead of featuring a single pleat making them totally unsellable as that was just so last season.

Ms Talridge said: “We were made aware earlier this week by a fashion reporter that children were producing poorly made and unstylish chinos.

“If their work is not up to the high standards we demand then they should just stick to stitching footballs for Nike.”

Wayne Hayes, Gap’s head of chino technology, said the problem might be that Indian factories had switched to using 10 and 12 year-olds to make the trousers, rather than six year-olds who had much more nimble fingers.

He said: “These older guys are fine for assembling toys or sticking the soles onto your trainers, but when it comes to putting some detail on a really top class pair of chinos they're hopeless.”

He called for improved training for the under 10s and warned of dire consequences if Gap was forced to switch its trouser manufacturing back to 83 year-old Chinese seamstresses working in horrendous conditions in the backstreets of Hong Kong.

“Your chinos could go up by as much as a dollar a pair,” he said.