IN a dual bid to reinvigorate the car industry and reduce road deaths, UK engineers are being given a £100m grant to perfect the world's first rubber car.

Ministers said developing a vehicle in which every single component is made from very soft rubber would help Britain retain its valuable bad car making skills.

Tom Logan an engineer from Coventry who has been working on a very wobbly Jaguar XJ, said: "The early prototypes have been wonderfully impractical.

"It takes about 20 minutes to come to a complete halt and the inside of it is absolutely covered in vomit."

Rubber car technology was first tested during world war two as an offshoot from the bouncing bomb project, but was abandoned after four troops were catapulted into occupied France after a collision in Dover.

But ministers insist they can be used as an alternative to lowering speed limits after research showed that 80% of drivers 'bought a car with more than two fucking gears for a reason, thank you very much'.

Last week Top Gear presenter Jeremy Clarkson test drove a prototype before deploying a traditional metaphor which left everyone deeply confused about whether he liked it or not. Clarkson added: "If this car was my genitals, I'd have an enormous rubber scrotum."

A child safety campaign highlighting the benefits has also been launched with the slogan: "Hit me at 30mph and you’ll go 'boing'. Hit me at 40mph and you'll go 'booooooiiiiiinnnnng'." 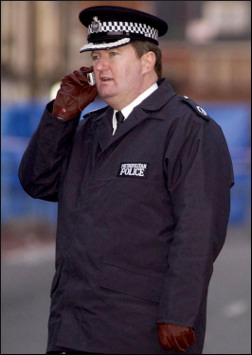 THE very big terror plot uncovered by police last week is not big, does not involve terrorists and is not a plot of any kind, it it has emerged.

An inquiry will now be launched into why the prime minister was allowed to scare the shit out of everyone, though experts insist it may just have had something to do with the news agenda.

A police spokesman said: "We were hoping to charge them with conspiracy to go to the shops to buy crisps and Tizer, but according to our lawyers that that's not an actual offence, as yet.

"We have therefore taken the precautionary step of sending these men and their potentially explosive beards back from whence they came."

He added: "Come to think of it, Bob Quick must be absolutely fucking livid. Whadya reckon?"

A spokesman for home secretary Jacqui Smith said: "Embarrassed? No, we're way, way beyond embarrassment at this stage.

"That's a bit like asking a streaker if he's embarrassed because he hasn't shaved."