Interns planning to be monstrous once they have power

UNPAID workers spend most of their time imagining how vile they will be to other interns once they get promoted, it has emerged.

“The ones who patronised me hardest will die first”

The university graduates are making their menial tasks bearable with detailed role-reversal fantasies about sending someone to four different places for one lunch order.

Intern Carolyn Ryan, on her way from Subway to Pret, muttered: Ill be all like Your role on this project is to keep the client happy, and if that means a 25-minute walk to Barburrito so be it.

’We didnt give you the right money? Put an expenses form through, itll be with you by the end of next month.

’Oh, Ill need you to hang around after the presentation. Wait for my call, though if were taking them to dinner that might not be until 10pm.'”

Julian Cook, working unpaid for a TV production company, said: I am going to ride those interns so fucking hard.

The first project I give them I wont even look at. The second Ill review in half an hour even though its a months work.

And the third Ill rip off the best bits and claim they were mine while theyre sitting right there, then tell them theyve learnt the most important lesson of all before firing them on the spot. 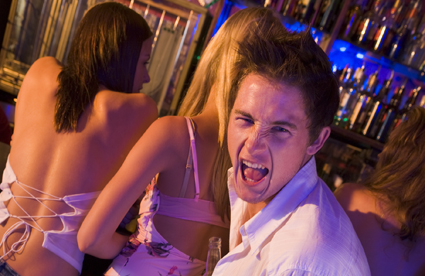 BRITAINS sleazy men have confirmed that they are just performing as their amusingly ribald alter egos.

After being confronted for shouting at a woman in the street about their tits, lecherous old perv Roy Hobbs explained that he was just portraying his comedy character, ‘Bobby Juggs’.

Hobbs said: “I actually assume the character of Bobby to highlight street sexism.

“Some people might be offended but that’s because they don’t get it. Or they are lesbians who need a good shafting.

”Because I can look at all the birds! Arf!

”Oh dear, there goes Bobby again. What is he like?”

Office manager Tom Booker blames his touchy-feely character ’Martin the Octopus’ for an ongoing campaign of sexual harassment against female members of his team.

Booker said: ”Martin is quite distinct from me in that he’s a naughty octopus who is always trying to stick his tentacles up women’s skirts.

“Essentially though he is a loveable rogue who is all about pushing the boundaries and if you don’t like it, you’re a miserable, bitter bastard who hates fun and marine life.”