A MAN has found and purchased something of use at a Christmas market, it has been confirmed.

Nathan Muir managed to leave his local Christmas market without buying a cuckoo clock, an ashtray made of a squashed lager bottle, or a bottle of artisanal vinegar. To add to this, he found and purchased an item with an actual purpose.

Market manager Emma Bradford said: “We stand by all our products. If there’s one thing that says “Happy Birthday Jesus” it’s a candle in a tin that costs £20, smells like Haribo, and is made by someone called Miranda.”

Stallholder Roy Hobbs, from whom Muir made his purchase of four AA batteries, said: “I also sell four lighters for a quid.

“I don’t usually come here because it’s full of idiots who wear scarves when it’s not cold while drinking hot wine.”

Absolutely pathetic twats pretending to be confused by recycling 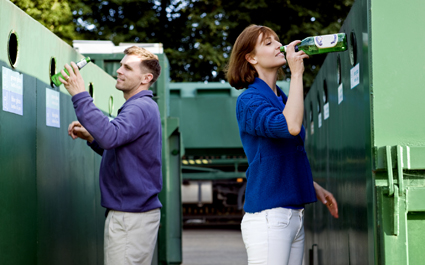 A COUPLE who claim their local recycling scheme is bafflingly complicated are actually just reactionary twats who like complaining, it has emerged.

Roy and Sheila Hobbs regularly criticise the simple fortnightly system, but mainly because they hate environmentalism which they consider to be a left-wing conspiracy.

Roy Hobbs said: “With three different bins we don’t know if we’re coming or going. Only an insane bureaucrat could have dreamt up a nightmare like this.

“Apparently you should recycle batteries but you can’t put them in your grey recycling bin, which makes no sense whatsoever. It’s like being trapped in a Kafka novel.

“I suppose next if you accidentally forget to rinse out a jam jar they’ll send round some enviro-fascist bully boys with knuckledusters to beat the recycling rules into you.

“Personally I’m very pro-environment, I’m just sick of left-wingers using global warming as an excuse to raise taxes then telling me I can’t put cat litter in the garden bin.”

Wife Sheila said: “You need a blooming PhD to keep track of these fortnightly collections. I think they expect you to sit up all night with a calculator working out which bin’s next.

“This recycling madness is why we need to cut government spending, scrap all benefits and only spend taxes on the army, police and hangings.”