RUPERT Murdoch is to use Twitter to share his everyday, random thoughts about controlling everything in the world.

The forgetful tycoon and telecommunications enthusiast has already tweeted which kind of water filter he favours in his shark pool and tips on how to stop a Persian cat from jumping onto the keyboard of a doomsday machine.

In just 48 hours he has managed to attract nearly 80,000 followers whom he has personally vetted for their loyalty to News Corporation before issuing them with a white jumpsuit with the distinctive ‘RM’ logo.

“Twitter is dismissed as trivial balls, because it is, but Rupert Murdoch’s account will eventually become a fascinating social document. Can I have my money now?”

Murdoch was still struggling with the new media yesterday and sent several tweets barking orders about the latest batch of lives he wants ruined and complaining about the lack of hefty bosoms in his timeline.

Early messages have included, ‘#Leveson still giving me shit. Anyone know where I can hire massive Chinaman with #deadlybowlerhat?’  and ‘Xmas #DowntonAbbey was gr8 but needed more neo-Conservative Australians in it. RT or I will destroy you. LOL’.

Hayes said: “The addition of Murdoch to Twitter is the most important development in social media since Robert Mugabe joined MySpace by saying his mood was ‘genocidey’.” 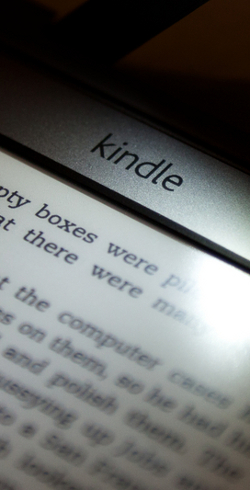 THOUSANDS of Britons are trying to make video games work on their new Kindles after refusing to accept that the device is a type of book.

Amazon’s Kindle e-reader was an inexplicably popular Christmas gift in the largely illiterate UK, with most recipients convinced it must be a games console.

Father-of-two Tom Logan, from Swindon, said: “My reaction on unwrapping it was ‘cool, an early 90s Gameboy’. I was bang up for a bit of old school Mario Land.

“I realised there was something very wrong when I pressed a button that took me to a shop selling ‘books’.”

He added: “I vaguely remember ‘books’ from school. They’re little rectangular things, you open them up and there’s shitloads of words in a row. Gays carry them around as a signal to other gays that they want sex.

“Certainly a book isn’t something I would ever want. Nor would I want one, electronic or otherwise, near my kids.”

Kindle recipient Stephen Malley, 28, said: “I rang up Amazon and told them it doesn’t do games and they just acted like they already knew and it wasn’t even a problem.

“There isn’t even an app that makes the screen look like it’s lager, and when you tip it it’s like you’re drinking the lager. You know what I mean, it’s funny as fuck.”

He added: “As it stands it’s worse than useless. I might fry it.”

Stephen Malley’s mother Pat, who bought him the Kindle, said: “I thought it might encourage Stephen to read more. That said I did think it would at least have Tetris on it.

“They should put a sticker on the box saying ‘Warning: is a book’. Then people could make up their own minds.”