BANKERS are planning to post every blind child in the UK a poisonous tropical spider in a bid to reclaim their position as Britain's purest form of scum.

In recent weeks the banking industry has watched helplessly as MPs took their place in the nation's hearts as the group they would most like to string up from a lamp-post or a sturdy local tree.

But now, under a plan entitled Taking It To the Next Level, bankers have plotted a sustained campaign which they insist will underline their status as the country's foremost purveyors of utter bastardry.

The spider plan, to be launched next week, will see the distribution of thousands of cat-sized arachnids, specially trained to scurry straight up a child's arm and bite it on the face.

The spiders will be sent out in pleasantly-textured boxes with the words 'chocolate buttons' written on the front in Braille.

A spokesman for Lloyds TSB said: "You, the snivelling public, with your obsession with trifling political sleaze and vibrating chairs, had almost forgotten us hadn't you? Big, fat, fucking mistake.

"By the time we're finished with you, destroying your pensions and drowning the nation in debt will seem like a quaint, 1950s tea dance."

He added: "I just wish we could be there when they open the box." 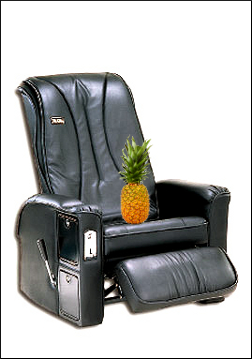 A NEW system of MPs' allowances was outlined by Gordon Brown last night as shamed members of parliament immediately began scouring it for scams and loopholes.

After 10 days of shocking revelations which have left them chastened but still unbelievably greedy and corrupt, MPs from across the House of Commons brought in specialists to examine the fine print of the new system on a 'no-win, no-fee' basis.

Scam consultant, Julian Cook, said: "Cleaning will now be reclassified as 'secretarial services', so they just have to ask their cleaner to lick a few stamps while she's hoovering the moat.

"They can still claim for computer equipment which means that television sets are now 46-inch, high-definition LCD 'monitors' that just happen to have a built-in Freeview tuner.

"They can't claim for furniture but they can claim for food, so what they'll need to do is place a Kraft cheese single on a vibrating chair and put it through as an open sandwich."

He added: "And of course, with an upper limit of £1,250 a month in mortgage interest payments, they will still be able to buy a house worth at least £300,000 using your money. Ha ha ha – what a bunch of absolute shits."

But officials say the new system will end the controversial practice of 'fucking', where an MP buys a house and then uses it to 'fuck' the taxpayer into the middle of next week.

The prime minister was forced to act on a momentous day that saw Britain plunged into a constitutional crisis following the resignation of the old man who shouts at everyone in that big wooden room you see on the news a couple of times a week.

Unveiling the reforms, Mr Brown insisted the House of Commons could no longer operate as a '19th century gentlemen's club' filled with ghastly people like Harriet Harman and Hazel Blears.