Passengers To Pay Less For Trains That Don't Turn Up

Transport minister Lord Adonis hailed the 0.4% price cut, insisting that if the trend continued UK rail travel was now just 250 years away from being worth the money.

He said: "This represents an average monthly saving of 80p which means you can now buy a newspaper to read while waiting for your veal truck with a sandwich trolley to turn up. Which it won't."

Rail operator First Capital welcomed the fare reductions, but warned that certain cutbacks may be inevitable, including fire extinguishers and brakes.

A spokesman said: "If you think, for one second of your worthless lives, that this price cut will go unpunished then you are unbelievably wrong.

"We will hurtle flaming, runaway trains into the Thames, every hour, until season ticket prices are allowed to rise. The ball, it would seem, is in your court."

To recoup costs, station car parking is expected to rise to £28,000 a second allowing Network Rail to confiscate your car as compensation the moment you switch off the engine.

Commuter Roy Hobbs said: "I spend two hours a day with my nostrils filled with piss going to and from a job that has killed my very soul.

"The prospect of jumping out of a burning train halfway across Blackfriars Bridge while saving 80p a month is the best news I've had since my boss was eaten by a shark." 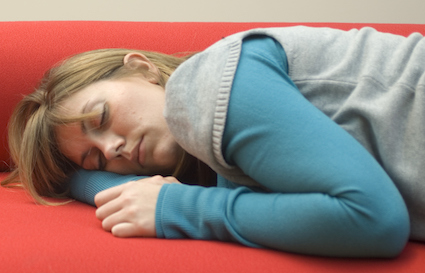 DRUNK people sleep so well they are often late for work, experts have claimed.

The Institute for Studies found that someone who has had eight pints, four mojitos, a couple of Bacardi Breezers and a cheeky wee whisky is usually out like a light and could sleep through a tornado.

Professor Henry Brubaker said: “Our research involved getting Brian, my research assistant, very drunk using a bottle of port, some delicious pear cider and a big jug of a cocktail that I call ‘vodka ‘n’ coke ‘n’ gin’.

“After about four hours he began to slump over on his right hand side before stretching out and making himself comfortable on the sofa. We then all stood around him shouting ‘Brian! Brian! Wake up! Brian!’.

“Eventually we had to check he hadn’t died.”

Professor Brubaker added: “It’s been suggested that drunk people feel tired the next day because they have not slept well. But we found that this feeling of sluggishness is in fact caused by all the booze. It would appear that large quantities of alcohol can cause dehydration, leading to fatigue and a pounding headache. We have termed this phenomenon a ‘hangover’. Perhaps it will catch on.”

Tom Logan, an experienced drunk from Finsbury Park, said: “The only thing that usually disturbs my sleep is the cab driver shouting, ‘Oi! Arsehole! Is this where you live?’.

“Last Tuesday morning I woke up at 10.30am on my doorstep. The cab driver had obviously dragged me up the path and then used my jacket to make a little pillow, before taking a £20 note from my bag and leaving the correct change in a small pile in the middle of my chest.”

He added: “Thank you mystery cab driver, that was really nice of you.”