BRITISH households in dangerous levels of debt are confident the banks will return the favour and bail them out this time.

Following warnings from the Bank of England about spiralling car loans and credit cards, UK households have said there is no need to worry because they have a mate who owes them big time.

“We bailed those guys out to the tune of billions, billions and billions, while in comparison I’ve got £13,500 to pay on a Hyundai Tucson.

“We’re not even talking 10 years ago and some of them still owe us, so it’s not like they’d be handing over the cash. Just knock it off their repayments. Won’t make a dent.

“Yeah I’ve made a couple of mistakes, but it’s not like it was breaking the law like the LIBOR stuff, so no way I’ll be harshly punished. That wouldn’t be fair.”

A spokesman for the British Banking Association said: “Irresponsible bailouts are so 2007. It’s all about settling debts in full on punitive terms now.” 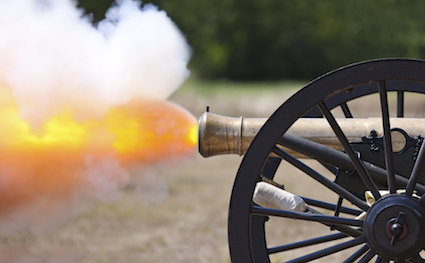 JACOB Rees-Mogg and David Davis will decide the Tory leadership contest by firing 19th Century cannons at each other outside Parliament.

Both the leading contenders want to establish their authority over the party with a display of ruinous violence that will cause millions of pounds worth of damage to the Palace of Westminster.

Tory MPs backed the plan insisting Rees-Mogg was a modern version of a toadying junior officer who would have supported the disastrous Charge of the Light Brigade.

Meanwhile, Davis is seen as a modern version of an experienced general who would have ordered the disastrous Charge of the Light Brigade.

Tory backbencher Martin Bishop said: “Either way we get a leader who will ensure the sort Brexit we want – a modern version of the Charge of the Light Brigade. Bold, adventurous and everyone gets killed.”

He added: “Also it means that Boris Johnson is not involved. He would want to settle it with some sort of public school game involving a biscuit.”