THE very existence of a new £150k Range Rover is enough to make you want to kill yourself, it has been claimed.

The luxury Range Rover SVAutobiography, which has deep carpeting, a chiller cabinet and massive chairs for horrible people to relax on, is a heartbreaking sign of the times.

Plumber Roy Hobbs said: “Just look at that fucking thing. We are all doomed.”

Mother-of-two Emma Bradford said: “I remember when only vets, farmers, and mountain rescue people had these massive jeep type things.

“Today we laugh at the idea of someone doing the public school run in a fire engine but one day that will happen too. And shortly after that we will all die in a massive war.”

However gangster Julian Cook said: “Cool. Has it got room in the spacious boot for up to three bound-and-gagged rival criminals?

“Obviously that is a purely hypothetical scenario but I just wondered.”

Competent cook convinced he is a fancy chef 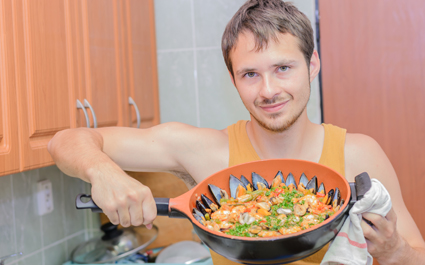 A MAN has been deceived into thinking he is a professional chef by food websites and celebrity cookbooks.

Family and friends say mechanic Stephen Malley’s ability to follow reasonably straightforward recipes has caused him to descend into a delusional fantasy world.

Malley’s wife, Jane, said: “Stephen seems to believe he’s a Paris-trained chef because he can make beef stroganoff from his BBC Good Food books, even though it’s just stew with a bit of cream in.

“It’s embarrassing when we have people over for dinner because he expects them to be totally blown away by something piss-easy like fish pie.

“More worryingly, he keeps saying ‘We should open a restaurant!’ which I used to think was a joke until I found a document on his laptop entitled ‘Opening night menu’.

“It was full of pretentious cack like braised duck hearts with fennel broth.”

Malley denied having grandiose delusions about his cooking abilities, saying he had only been using the internet to look up country pubs for sale because of ‘something to do with work’.

He added: “You don’t become a top chef just by owning a few cookbooks. You have to take risks, like I’m doing tonight by putting some chilli flakes in my tuna and pasta bake.”