IF the NSA keeps spying on the internet consumers will return to vinyl records and films on tape, massive companies have warned.

The world biggest technology firms have joined forces to demand an end to internet spying before people are forced back into records shop and video rental stores, with their sticky carpets and adolescent stench.

Google, Apple, Facebook, Twitter, AOL, Microsoft, Yahoo and, for some reason, LinkedIn, say the NSAs clandestine activities will make the public distrust the very act of downloading in case it is then used to blackmail them to death.

A spokesman for Apple said: “The NSA must not be allowed to undermine the internets primary function of enabling the free movement of money from you to us.

“Do you want to go back to queuing in some dirty little record shop full of manky hippies looking for a particularly rare – and shit – John Cale EP with a gatefold sleeve?

“No, because youre decent.”

The spokesman added: “The NSA clearly does not remember spending part of Friday evening in a Blockbuster trying to work out what exactly had been spilled on the floor earlier that day.

“And when you buy or rent something from iTunes we dont force you to look at our pasty, acne-ridden faces as we slowly tap the serial number into the computer like an animal.

“‘That’s due back by 5pm on Monday’. Remember that? Remember being told what to do by some whiny, undergraduate ponce in a fetid polo shirt? That’s no way to live.

“Your credit card details are totally secure. I swear to God. 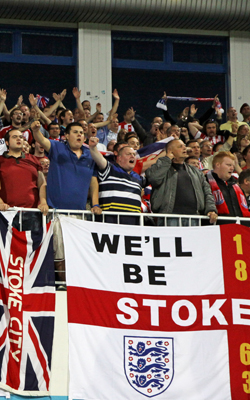 The battle for the Premier League title became a one-horse race at the weekend as clubs like Man United, Man City and Chelsea abandoned their ambitions to focus on fighting relegation.

But critics say that a Premier League thats won before Christmas shows how unbalanced English football has become.

“What about the real fans who loyally turn up at White Hart Lane to see their team labour through another defeat?

Granted the big teams are intimidated by having to play on a rainy Tuesday night in a shithole like Old Trafford, but most of their games are on a Sunday so they get the TV money.

And then in Europe you see those same names raking it in from big-money clashes with the likes of Viktoria Plzen and F91 Dudelange.

Chelsea manager Jose Mourinho said: Theres no shame in being beaten by Stoke, not when theyre fielding players like Ryan Shawcross and Glenn Whelan, and then can bring a Moroccan international off the bench.

Its an honour for us for our defeat to be part of their glittering history.