TESCO has launched a range of bagged salads that come already in a bin to save customers throwing them away.

The Ready Binned range means that products that will only end up being wasted anyway can now be discarded without even needing to be put in the fridge.

“So now we’re selling them in a bin. You just take it home, then tip the contents into a larger bin, so that they can be taken away and disposed of.”

Householder Emma Bradford said: “As a busy working mum, I don’t have time to take food out of the fridge before I throw it away, so this is a great boon.

“Hopefully they can do this for bread, courgettes and packets of pre-sliced turkey bought on some strange whim.” 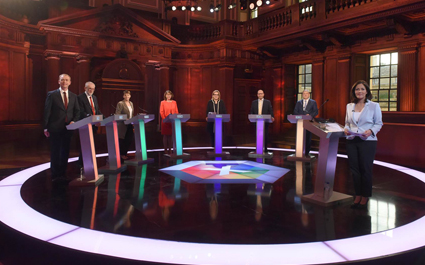 VIEWERS of last night’s election debate cannot understand why the losers’ lights were left on throughout the whole thing.

Britons were baffled after waiting for party leaders to be eliminated for getting questions wrong, then to spend the rest of the show standing mute in darkness.

Mary Fisher of Warwick said: “Lights out one by one, then a quickfire round between the remaining two, then the winner. That’s the way Britain likes it. They’ve no call to go messing around.

“That bald one just said the same thing over and over but his light stayed on, and even when the contestants nominated someone else they still stayed talking.

“There’s no way the Welsh one should have been in, or the Scotch one, and the pale one with tiny eyes I kept thinking was the quizmaster’s sidekick like him who’s tall off Pointless.”

Fisher added: “That Rudd woman should have been first to go. She didn’t know fuck all.”