We are cruising at 36,000ft and I hate these bastards even more than you do, announces Ryanair pilot

THE pilot of a Ryanair flight has announced that the plane is cruising at 36,000ft, that skies are clear all the way to Madrid, and that he hates his employer more than you ever could.

Captain Tom Logan assured passengers that their flight would arrive on time, that however badly they felt treated by the airline it was nothing compared to how he had suffered, and that as soon as they hit the runway he was quitting.

Passenger Margaret Gerving said: “It was so reassuring.

“Just as I, and all the other passengers, were feeling panicky about our mounting fury, he calmed us all down by revealing the depth of the loathing in his own heart.

“His empathy was so charming, and then he gave us several new ways to despise the airline, a full rundown of compensation procedures and the home phone numbers of the board of directors.

“He even let some kids up to the cockpit, where he showed them the controls and demonstrated exactly how the company’s bonus offer was utter bullshit nobody would ever receive.”

Following the pilot’s speech, the cabin crew stood in the aisle for a short demonstration of exactly how Ryanair could go and fuck itself. 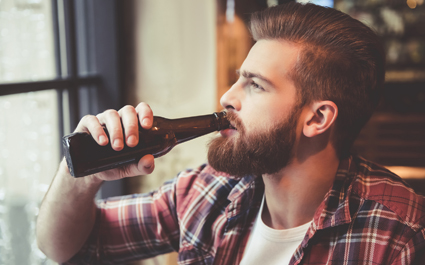 EXPERTS cannot work out why anyone would buy a small, expensive bottle of beer in a pub.

Researchers at the Institute for Studies found no reason to buy a little bottle of beer in an environment where you can get twice as much beer of superior quality for the same price.

Professor Henry Brubaker said: “Maybe bottled beer drinkers just like the pretty labels, or feel it is useful to be holding a potential weapon in the event of a sudden brawl.

“Other than that, we are at a loss. Perhaps there’s some deep psychological reason to do with bottles looking a bit like penises, or being able to scratch off the labels to relieve sexual tension.

“People buying bottled beer in pubs is one of mankind’s great unsolved mysteries, like the Marie Celeste or who built those Inca temples with the weird UFO pictures.”

Bottled beer fan Stephen Malley said: “I’ll sometimes have something called a ‘Birra Morretti’ which is a mediocre foreign lager that works out at six quid for half a pint.

“I think it dates back to when I was 13 and thought bottles of Budweiser were incredibly cool even though ‘Bud’ tastes of nothing but marketing.”