A WOMAN who works as a ‘brand optimising consultant’ actually leads a nightmarish hand-to-mouth existence, friends have noticed.

Emma Bradford’s impressively-titled business appears, according to witnesses, to involve working incredibly long hours for horribly demanding bastards then chasing them to pay her.

Friend Tom Booker said: “Her website is like wow. But last month I had to lend her £100 so she could buy food.

“Honestly, hear her talk about what she does and you’d think she was being jetted around the world by blue-chip companies delivering wisdom to 54th-floor boardrooms, not ringing around crap local firms begging for work.

“She’s so in love with ‘going it alone’ and ‘leveraging her skillset’ that she hasn’t noticed she’d earn more watching repeats of Taggart all day on the dole.”

“Fluctuating revenue streams are a natural part of the business cycle. And now I’ve closed the deal with Gary’s Pizza ’N’ Chicken Hut I can afford to buy a second pair of trousers.”

Fond memories of the A-team ruined by watching it 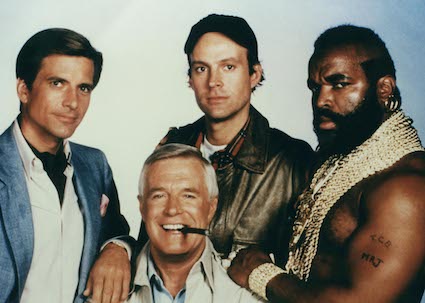 A MAN has had his fond memories of The A-team ruined by actually watching a full episode.

Stephen Malley, 35, discovered his girlfriend Nikki Hollis, 28, had never seen the show and after telling her how much loved it, bought a DVD for them both to watch.

He said: “The title sequence was as gripping as ever and we both did an ironic head-bang to the bit where the guitar riff comes in. But when the show actually began, Nikki began asking all these questions.

“She kept saying things like ‘if they’re military trained, why do they miss when they try to shoot the bad guys?’ and ‘if they’re trying to escape from the government, why do they drive around in such a distinctive van?’.”

A scene where the A-Team spent hours building a contraption that could launch cabbages to fend off the enemy caused the most confusion.

Hollis added: “I just thought ‘They’re in America, why don’t they just walk to the nearest Walmart and buy a semi-automatic rifle?’.

“It’s really hard to sit through a show like this when you’ve seen all five seasons of The Wire. Not wanting to get on a plane isn’t enough of a trait to build an entire character around.”

To cheer himself up, Malley plans to watch Knightrider and Airwolf which he believes will both be exactly as thrilling as he remembers.