You Are No Better Than A Frenchman, Markets Tell Britain

THE people of Britain may as well sit round all day leering at women and eating pigs' testicles, the international currency markets said last night.

As the pound plunged to a record low against the Euro, currency dealers said Britain was now dangerously close to reeking of garlic and cigarettes, mixed with the faint odour of stale urine and mashed geese.

It was a humiliating blow for a country that only six months ago smelt of freshly cut grass, leather and walnut, damp spaniels and a recently discharged shotgun.

As thousands of people across Britain set fire to sheep, economists warned of disgusting poetry and a desire to introduce your best friend's 16 year-old daughter to the delights of perverted intercourse.

But they also stressed an upside to parity with the Euro, including getting drunk and not starting a fight, an ability to discuss philosophy without sounding like a ponce and much better cheese.

Wayne Hayes, a council worker from Reading, said: "I am zinking zis is not good, yes? Oh no, what is happening to my, ow you say, voice? Mon dieu, I cannot stop talking like zis. Haw hee haw hee haw." 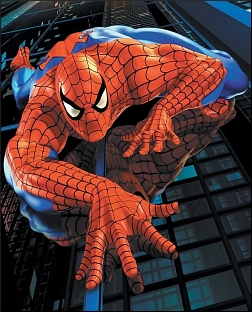 PRIME minister Gordon Brown was last night under observation in a London psychiatric hospital after claiming to be Spiderman.

Mr Brown told the Commons that he had 'vanquished' both Doctor Octopus and the Green Goblin through a combination of superhuman agility and a strange 'sixth sense' he acquired after being bitten by an irradiated spider.

He added: "I can also swing between skyscrapers and I'm very good at science. Have you guessed who I am yet?"

As Commons security staff moved towards him, the prime minister ran from the chamber, throwing his briefing notes in the air and removing his shirt and tie.

Mr Brown was finally captured when he attempted to scale the outside of the Palace of Westminster before falling and twisting his knee.

As he was handcuffed and helped into the back of an ambulance he shouted: "You have bound my hands because you are scared I will use one of my sticky webs!"

A Downing Street source said: "Some days he would claim to be Doctor Octopus and make all these terrible decisions and say, 'only Spiderman can stop me'. And then he'd wink at us."

The source added: "Spiderman was just one of his incarnations. For much of July he thought he was either Dangermouse or Count Duckula."

A police spokesman said last night: "A 57 year-old man from Central London was this evening taken into protective custody under Section 4 of the Mental Health Act."