AMMA, the big fat indian woman who has hugged more than 26 million people, has warned Jonathan Ross not to come within 100 metres of her comforting bosom.

It is the first time in 30 years that Sri Mata Amritanandamayi, also known as Amma or 'mother', has refused to hug another human being, insisting the BBC chat show host 'stank of evil'.

The 'hugging saint' said: "Some souls are born for great tasks, other souls are humble but do great things. Jonathan Ross is a jumped-up researcher with a dirty mouth."

The Amma Foundation has now adapated its motto to read: "May all the beings in the all the worlds be happy – except Jonathan Ross."

She added: "The greatest tragedy in life is not death; the greatest tragedy takes place when our talents and capabilities are underutilized and allowed to rust while we are living. Or when the BBC gives £18 million of public money to a prick.

"If he was my child I would have thrown him into the River Pamba as an afternoon snack for the crocodiles."

The foundation's online shop has also started selling  t-shirts bearing the chat show host's face and the slogan: "If you see Jonathan Ross, kick him in the nuts."

Amma travels the world hugging anyone who comes forward, often uttering a few soft words of comfort to those most in need.

At her recent event in London she embraced the chancellor Alistair Darling and whispered: "You couldn't run a bath. For God's sake just resign."

F*ck-Boots Must Stay On, Says Government 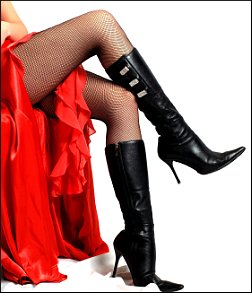 WOMEN who go out dressed in fuck-boots must keep them on in the bedroom, ministers said last night.

Trading standards officers have been inundated with complaints from men who claim they went with women in kinky footwear expecting them to be sexual deviants only to discover they were as adventurous in the boudoir as Kathy Staff.

A disappointed Wayne Hayes says he made a formal complaint to his local officers after he went home with one lady dressed like Julia Roberts in Pretty Woman who then made him do it through a hole in her nightie, with the lights off.

Mr Hayes said: “If I was looking for that kind of experience I could have gone with one of my mum’s friends from the bingo like normal. At least then you know what you are in for. Teeth or no teeth.

“I thought I’d get tied up at the very least, and maybe some hot wax on my privates. Instead I got a friction burn off the nightie, which also brought me out in quite a nasty little rash. I didn’t even know you could still buy winceyette.”

Bill McKay, Director of Kink at the Pervert Institute, said the new regulations were necessary to protect ordinary demented sex fetishists from falling prey to impostors.

He said: “To me a six-inch spike heel says I’m going to be kept in the basement for a month in a gimp suit. What does it say to you?”

Harriet Harman, the minister for females, said women had the right to dress as they pleased but had to understand that with rights came certain responsibilities.

She said: “If they are black and leather and up to the knee then it’s ‘lights on’ as an absolute minimum. Look at you, you're all dirty.”