THE world’s richest man has admitted he would swap it all for 24 hours of coolness.

Microsoft boss Bill Gates, who is worth an estimated $79bn, admitted he would exchange his wealth for natural charisma and the ability to make Coke cans fall out of vending machines by kicking them.

He said: “Sometimes I walk into a bar and people are like ‘who’s that badass’. Then I wake up and it’s like, oh bum, I was dreaming!

“I tried buying a leather jacket but it looked weird, like I had wide buttocks. Obviously a motorbike is out of the question, you can really hurt yourself on those things.”

Last year Gates spent $4bn paying cool people including Benicio del Toro and Jack Nicholson to hang out with him for an afternoon.

However his guests just formed their own social group on his patio, laughing among themselves but then going a bit quiet whenever Gates approached with a tray of sodas.

Woodpecker and weasel already talking about having kids 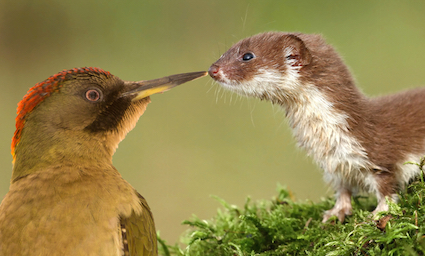 A WOODPECKER and a weasel have moved in together and are ‘excited about starting a family’.

The two animals met yesterday in a field and admitted their attraction was ‘immediate and intense’.

The woodpecker said: “We caught each other’s gaze and we both just knew we had to have each other at once – but we wanted it to be in a special, private place.

The weasel added: “I’m still too knackered to think straight, but I know it feels right.

“Last night we were both so giddy that we talked about kids and names and even the quality of the local schools.

“And I have promised that if we do have children I will try not to eat all of them.”