Clooney sick of having Goodfella’s pizza for tea

GEORGE Clooney has expressed frustration at having frozen pizza every evening because of his wife’s busy work schedule.

He said: “I don’t expect her to cook every night but she is literally always in Brussels or wherever, doing lawyer stuff. I can make an okay lasagne but it isn’t worth bothering if it’s just me.”

Clooney explained that most evenings at about 7.45pm he goes down to the basement of his Lake Como mansion and drags yet another Goodfella’s pizza out of the freezer.

“Lately I’ve gotten quite into the pepperoni one, sometimes I add a few extra olives to jazz it up a bit. Then I get a handful of salad from one of those supermarket salad bags and plonk it on the plate.

“Often I find myself staring for a few moments at the resulting meal. Then I put it on a tray and carry it to the room with the nicest television.

“If Amal gets back early enough she might have a slice, then she’s off upstairs to do a conference call or something.

“Every other night I have a glass of white wine. If there’s a true crime documentary on I will shout up to Amal’s study in case she’s interested, but she always says it’s a different kind of law.”

Len McCluskey revealed to be Marquis of Shaftesbury 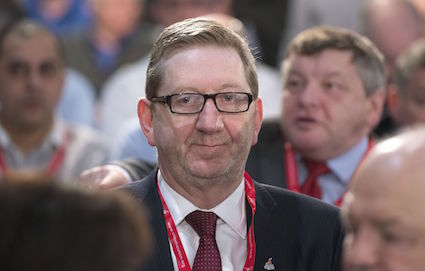 The Unite general secretary was forced to admit his true identity after it became completely obvious he wants the Conservative Party to be in power forever.

Removing his jowly, prosthetic face, the Marquis said: “I’ve enjoyed being Len, it was absolutely spiffing,  but I did get rather sweaty under all this latex.

“Because I have the bearing of an aristocrat it was necessary to make me look as if I had been raised in a working class environment where people lift dirty things with their hands.

“Anyway, damage done. From on you will never know whether Britain’s unions are led by genuine socialists, or me and some of my friends from school.”

He added: “John Parrott works for MI5 and could kill you with his nose.”