THE shady figure who sold Myleene Klass a Catford garage for £2 million is refusing to discuss the deal.

The man, known locally as Freckled Dave, reportedly told the former Hear’Say singer she was getting an absolute bargain.

A source close to the star said: “He told Myleene that Catford was an up-and-coming area, that it was on the Crossrail route and that it had planning permission to be turned into a thirty-storey block of luxury flats for oil oligarchs.

“Unfortunately, when she came to inspect the place to find it occupied only by an Alsatian being sick in the burnt-out shell of a Fiat Punto, she realised she’d made a mistake.

“People joke that she’s using it to store all the unsold copies of Hear’Say’s album, which is untrue because actually that sold very well.

“It’s actually being used to store copies of her classical compilation album, Myleene’s Music for Romance.”

Man faces pretending to like Ride all over again 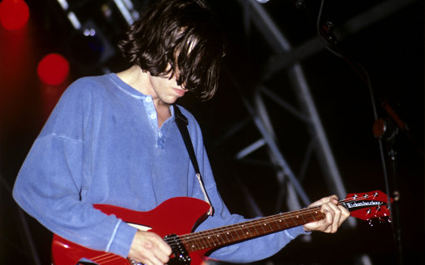 A MAN in his thirties has expressed dismay at having to pretend to like 90s shoegaze band Ride for the second time.

37-year-old Tom Logan bought the newly-reformed group’s tapes when he was at school as part of a ploy to make girls like him.

“Because I was physically puny I could not impress girls through my sporting prowess, so the only logical alternative was to embrace lank hair, steel toe-capped Doc Marten’s and ethereal reverb-drenched rock with inaudible lyrics.

“Although I created an entire identity based around androgynous dream pop and a vague sense of social isolation, I was always jealous of the hard kids who got to listen to Public Enemy and NWA, or even just Monster Hits tapes.”

Logan said the reformation of Ride had left him feeling obliged to attend a concert: “People are already badgering me about it.

“All I need now is for Catherine Wheel, Lush and Chapterhouse to get back together and that’s my diary buggered for the next few months.”