CRUFTS winner Ricky the poodle has said he just likes to do normal disgusting dog stuff.

The immaculately coiffed two-year-old standard poodle said: “Yes I have won the biggest prize in being a dog but this won’t change me, I’m still a normal canine who likes to throw up and then eat some of it.

“Also I eat other animals’ faeces, especially cow pats which I find quite piquant.

“My other favourite pastime is scrunching up a cushion into a ball then thrusting my genitals into it in a grotesque parody of sexual intercourse.

“I may be Crufts winner but that doesn’t mean I won’t still get a bright pink erection for no apparent reason, often when my owners have guests.”

Having a fight 'best way to burn off calories' 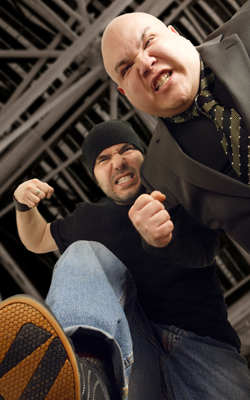 BRAWLING is the most effective way to shed excess weight, according to doctors.

Medical experts hailed fighting as the best exercise because it combines muscle-toning punches with the cardio benefits of chasing down or fleeing from an opponent.

Doctor Emma Bradford said: “Fighting is like boxing except you do it in the street with no referee or rules.

“The best thing about fighting is it’s free, and you can initiate a fight at any time, for example during a lunch break.

“Obviously it gets easier the further north you go, but even in civilised regions if you go up to someone and slap them hard across the back of the head they will probably fight you.

“I’d recommend starting with someone physically frail. The smoking area outside your local hospital is a good place to find an entry level opponent.

“Eight minutes of intense fighting burns off the same calories as an hour in the gym.”

The government recently announced £20m funding for the Get Britain Fighting campaign. A spokesman said: “It’s time to get off the sofa, go outside and bring it.”