THE Queen has instructed Britain to stay indoors, sup a few cans, watch telly and keep its head down until ‘all this bollocks is over’.

In a stirring address to the nation Her Royal Majesty told her subjects to give each other ‘a wide bloody berth’ in public and that ‘if they want a bit of sun, there’s nowt wrong wi’ laying out in’t yard’.

The historic address, only the fifth special televised broadcast of her reign and the first since since her emotional tribute to Sir Alex Ferguson after his 2013 resignation, was made from her palace in Bolton and focused on good solid common sense.

She continued: “Don’t bugger about driving to hills or that crap. Police have got enough going on without you being a fancy bollocks. If you want a view, look out t’window.

“You’ve got your kids home, you’re off work, happy days. I’m 94 next month and I’ve not got it because I’m being careful.

“Anne’s getting me bits from Morrison’s when I need them and she leaves it at end of drive. The great-grandkids Facetime and Charles blathers down the phone. Too much if I’m honest.

Well this is fun, say parents 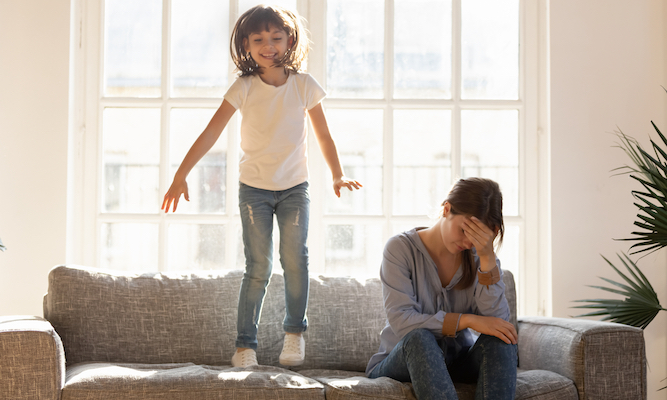 PARENTS have confirmed that juggling working from home and educating young children while never going out is just an absolute f**king joy.

At the beginning of what was, in the world before, the Easter holidays mums and dads are just delighted at their new seven-day schedule of working, childminding and teaching from within small prisons.

“It’s great! It’s definitely not difficult helping a six-year-old with spellings and placating a sulky  ten-year-old at the same time as being on a budget crisis call and being 10,470th in the queue for a Waitrose order.

“And there’s so much solidarity for the working mother. Facebook certainly isn’t full of photos of smug, balanced lesson plans from stay-at-home mums who clearly see this as their long-awaited chance to shine.

“My wife and I are spending so much more time together, when we flip a quid to see who gets to work in the bedroom and who does incredibly important work to the soundtrack of whatever shit the boys are binge-watching on Netflix.

“We’re both deliriously happy. And this goes on until October at least.”