NEW research has revealed that Britain's rich people are happier than ever, thank you for asking.

With the cost of living spiralling upwards and a recession looming, the Sunday Times published a long list of people who have absolutely nothing to worry about.

Top of the list for the third year in a row is Indian steel magnate Lakshmi Mittal, who uses people like you as pins in his giant underground bowling alley.

Hans Rausing, whose family firm invented a range of novelty key rings, is now worth £5.4 billion and sits around all day rubbing swan fat into his thighs.

His spokesman said last night: "A recession can be devastating if you don't have a tremendous amount of money. Have you thought about cheering yourself up with a novelty key ring? This one looks like a Womble."

But not all the millionaires have enjoyed a good year. Sir Paul McCartney's last album was an abomination, while retail tycoon Sir Philip Green has seen his fortune slip by around £100 million, fuelling speculation that he may have to stop flushing his toilets with petrol.

The 4000 square foot London mansion will be modelled on the government building where he used to work before he bought a controlling interest in a state-owned gas company for £12.50.

The home will be guarded by 72 lap dancers each armed with a leopard, while overnight guests will be woken by Charlotte Church singing Pie Jesu while dressed as a naughty angel. 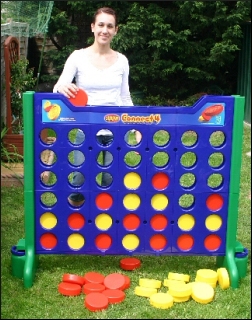 GORDON Brown is one of the worst players of Connect Four ever to hold the office of prime minister, friends of Tony Blair said last night.

Writing in the Mail on Sunday, former Labour fundraiser Lord Levy said Mr Brown would drop his counters in a straight line and never see that his opponent had two on one side and one on the other so he could drop a winner in the middle.

"He got caught every time, and then sat there staring, with this big stupid look on his face as if to say 'how did that happen?'"

According to Levy, the then chancellor also lined up his battleships in exactly the same formation and failed to grasp the fundamental principles of Snakes and Ladders, insisting that if the underlying conditions were in place it would be possible to climb up a snake.

One Blair aide said: "Of course we used to move his pieces around every time he went to the loo, but he was so off the pace he never even noticed."

It is understood Mr Brown used to be good at Monopoly, but Blairites insist this was only because he inherited Bond Street and Regent Street from Ken Clarke.

The source added: "At one stage he even had Mayfair and Park Lane, but then he mortgaged them to buy votes in the Midlands."