BOOKS of Indifference were opened at B&Q branches across the country today for men who could not a give a monkeys about the 10th anniversary of the death of Diana, Princess of Wales.

Large queues had formed by early morning as ordinary folk stood in line for the chance to express in writing their utter amazement that anyone still gave a toss.

No flowers were left to rot into a smelly pulp at a makeshift shrine, and few words were spoken as the men waited patiently, many of them writing a simple “What the fuck?” before heading off to buy a three-litre tub of Polyfilla.

Gary Chalmers, 34, visiting the B&Q Warehouse in Ongar, Essex, wrote: “So much for the much vaunted safety features of the S Class!”, before his mate Terry Nittens, also 34, added “Next time love, wear a seatbelt”.

Ben Tilson, 39, summed up the feelings of many when he wrote “wank” in the book at the Didsbury superstore. His best friend Rob Powers, 38, added “I shag arses, call me” and the number of Mr Tilson’s mobile phone.

Archie Hunter, 87, demanded to be wheeled from his old folks home in Chippenham to his local B&Q so he could write: “I strangled Germans with my bare hands.” Phil Topping, his carer, said: “He always writes that now, even on his Christmas cards.”

Prince Philip was one of the first to sign, although he was immediately accused of hypocrisy for feigning indifference when it was well known he hated Diana and ordered her assassination by the British secret service.

Peter Wright, the MI5 operative who led the complex operation to kill Diana, was another early signatory. He also denied charges of insincerity saying he had only been obeying orders when he murdered the Princess. “It was strictly business,” he said. “Nothing personal.”

BAA To Reduce Check-In Times By Firing Everyone 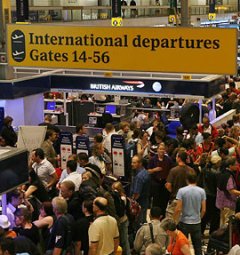 BAA has unveiled a radical plan to improve the efficiency of Britain's major airports by firing all of its staff.

After a major consultation exercise, the directors believe an anarchic, blood-spattered free-for-all would improve check-in times at Gatwick and Heathrow by up to 97%.

Bill McKay, BAA's head of operations, said: "It became clear to us that having people working in the airport was actually making things much, much worse.

"Allowing people to stroll through the airport unhindered before throwing their own bags onto the plane will deliver an enhanced airporting experience.

"If people can't get along then inevitably there will be bloodshed. But it's far better to have these fights in the terminal than bottling it up until you get on the plane."

McKay said the purchase of duty free goods will be obligatory and included in the ticket price.

"Passengers will simply collect a big box full of fags, brandy and Toblerone as they arrive in the terminal."

He added: "Lager will be available from a self-service kiosk so you can all get suitably tanked-up and aggressive before you inflict your hellish families on the good people of Southern Spain."

And he insisted that security would not be compromised: "The in-built prejudices of the average British person will prevent anyone a bit suspect from boarding the plane.