SHOPPERS in the village of Minchinhamptonsteadbury have been forced to throw their goods home after a total ban on bags.

Residents are slowly coming to terms with the new method of transporting their weekly shop, after a successful campaign to collect all the bags in the village and throw them into Steadbury Reservoir.

Under the new regime, shoppers at the village Co-op start throwing their goods as soon as they reach the end of the checkout. Each item is then picked up and tossed in the direction of the shopper's home.

Margaret Gerving, a retired headmistress, said: "It's good excerise and it encourages you to buy round food like melons, oranges and turnips as there's a decent chance they'll roll for a few yards.

"Some members of the bowling club have become really quite proficient. Until they get to the bottom Minchin Rise of course, at which point it turns into a total bloody nightmare."

Mrs Gerving added: "Bags of flour tend to just hit the ground with a dull thud. There's no bounce in them at all. And I have to wrap my bottle of sherry in a duffel coat."

Councillor Roy Hobbs said: "Things are bit chaotic at the moment. You have to run past the Co-op as there's stuff flying out the whole time.

"A lot of people are getting their shopping mixed-up and I've seen a few knives. We simply have to get this sorted before Christmas."

Ant And Dec Sweep Board At Common People's TV Awards 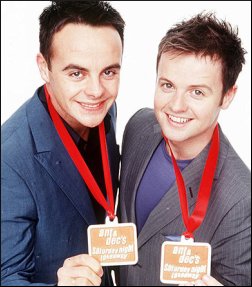 The insolent duo were the undoubted stars of the celebrity-ridden ceremony at London's finest Holiday Inn.

The annual awards are a celebration of the best in British entertainment enjoyed by people who drink directly from the can.

The Newcastle-born Roman Catholics received rosettes for their programmes I'm A Celebrity…And That's All and The Saturday Night Abomination.

Dr Who? the BBC's contribution to scientific fiction, received a prize for the Show With The Greatest Number of Ooohs and Aaahs.

Ms Jemima Skank, an actress in The Eastenders, was named Woman Who Will Do Things Your Wife Finds Disgusting, while Jeremy Clarkson, a Yorkshireman, collected a certificate for Man Your Dinner Party Guests May Find Amusing.

The lavish ceremony included more than 200 cases of Jacob's Creek, chicken gujongs with a spicy Mexican dip and After Eight mints.

Each guest received a complimentary copy of You've Been Framed in the Most Ghastly Fashion.