Britain looks out of window and says f*ck

BIG grey clouds have prompted everyone in Britain to look out of a window and say fuck.

“That lovely sunshine might just as well have been a dream.

“I’ll be eating my lunch in front of the computer again today.

“Maybe I will go onto a big shop’s website and buy some shoes I don’t really  want.” 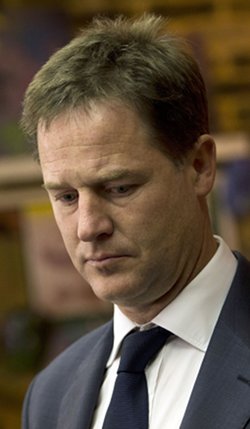 ROBERT Mugabe has agreed to share the Zimbabwean presidency with Nick Clegg.

Newly re-elected Mugabe hopes that Clegg’s puppyish appeal will lend his regime a veneer of liberalism, while the UK’s former ‘deputy’ prime minister is keen to try out polygamy.

“Get Clegg in to give naively hopeful smiles in a garden, like a virgin bride, and everyone thinks it will work out fine.”

Nick Clegg, now Zimbabwe’s Deputy Chief Executioner, said: We have already used our influence to insist on a referendum on proportional representation.

“Reform of the first-past-the-post electoral system is clearly the number one issue facing the people of Zimbabwe right now.

Liberal Democrat president Tim Farron MP said: Mugabe was lucky to get him as a coalition partner, actually.

“We had a very tempting rival bid from Iran.”