DISFIGURED
child murderer Freddy Krueger has asked householders to consider the
environment or he may have to tear out their spleens, it emerged last
night. Or perhaps you could share a bath with a friend?

The
iron-gloved loner, who exists in a semi-corporeal state since being
burned to death by a mob of bereaved parents, is working in
conjunction with leading environmental charities and will enter the
nation’s dreams to personally deliver an eco-conscious message to each
and every UK citizen above the age of puberty.

Freddy
said: “Fitting
an energy meter has really helped me to monitor my carbon footprint.
It’s amazing what a difference things like low-wattage lightbulbs
make.

“Now
I’m constantly thinking of creative new ways to reduce my
consumption, for example by throwing corpses into the furnace instead
of leaving them to rot.

He
continued: “In the past I’ve kept the ominous furnace in my dark,
industrial lair burning pretty much round the clock. Really, that was
just for effect and completely wasteful.â€

Freddy
went on to describe his newly-adopted ‘make do and mend’ approach: “For example, I wanted to make myself a next glove, with serrated
finger blades instead of straight, and a hypodermic full of
skin-melting poison on the thumb. But making a bespoke wearable
weapon is a very energy-intensive process.

“I
asked myself, ‘can I make do with what I’ve got?’ The answer was yes,
the existing glove is more than adequate and not even starting to
rust.”

He
concluded: “It’s up to you to make a change. If you don’t I will
get in your head while you’re asleep, cut your face off and then
staple it back on, upside down.

“That’s
how passionate I am about this.” 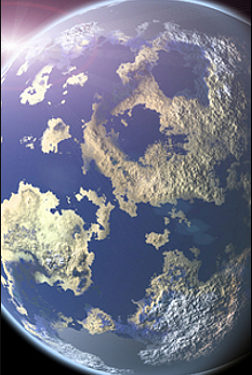 HOPES of intelligent life on planet Gliese 581g were dashed yesterday as
scientists revealed it is actually a bit like Sunderland.

We should probably just wait for the next one

Images from the Keck telescope clearly show deep grooves carved into the planet’s crust by aliens dragging their knuckles back and forth, waiting for a human bouncer to punch.

The images were enhanced as the surface is usually covered in a thick, noxious gas believed to be caused by the planet’s vast natural Vaux breweries.

Astronomer Roy Hobbs said: “It has four times the gravity of Earth, so its lifeforms are squat, sedentary creatures that hate to move very far from where they’re born.

“They also have trouble mating, socialising or realising anywhere other than their immediate surroundings exist.

“Yet despite these setbacks they have independently come to the conclusion that Alan Shearer is a twat.

“This confirms the theory of convergent evolution. Any species we encounter in the future will agree that he’s a tedious bastard who is probably still going on and on and on about goal-line technology.”

NASA are planning a manned probe to Gliese but warn that the mission could take many years as the astronauts will first have to learn the Mackem accent to avoid having their heads immediately kicked in.

Hobbs added: “I imagine the moment of first contact with the alien race will be a lot like the ending of Close Encounters if it had been set during a stag weekend in South Shields.”