The sound of flip-flops, and other annoying side effects of hot weather

TRYING to relax in wonderful sunshine but instead just irritated? It’s because high temperatures have these unfortunate side-effects:

The sound of flip flops

The metronomic sucking sound of flip flops slapping against bare feet is always exasperating, but now everyone’s in them there’s no escaping it. And these relaxed hang-loose ugly-toed bastards have no idea how bloody infuriating they are.

Rub on all the antiperspirant you want, park your perspiring bulk next to a full-speed fan; you’re still going to be gushing from your armpits, back, and the crook of your knees. The sooner scientists discover how to convert us into cold-blooded lizard people the better.

Just as leaves turning red indicate that autumn has started, parks filled with crumpled beer cans and disposable BBQs are a tell-tale sign that a heatwave has begun. So wonderfully carefree and summery, leaving all your shit on the beach and pissing off home.

It was fine, being allowed to see people in your garden when it was too cold to do so. But now the sun’s out every mother complaining about lumpy coleslaw or friend whinging about yet another failed relationship is hanging out, forcing their inane chatter into your ears. Try to stop yourself pressing ‘mute’ on their faces. 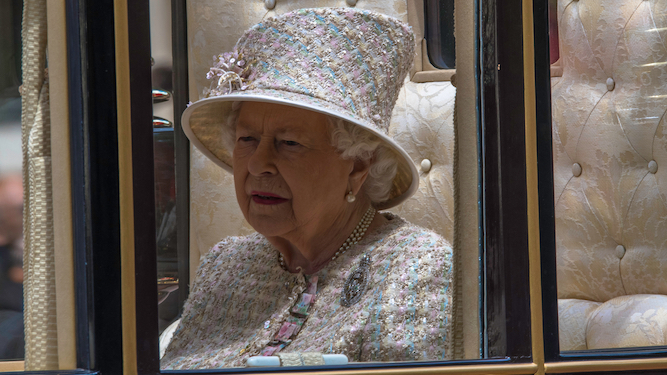 by Her Majesty Queen Elizabeth the Second

I AM the monarch of this country. I am 95 years old. My son, the future King, is 72. So let me say this a final time: f**k off out of here with your Royal Yacht.

Every time there’s a Tory government it’s the same. ‘You know what she’d really like? A new yacht.’ ‘She hasn’t been the same since the scrapping of Britannia.’ Horseshit.

I’m pushing a century. I’m dealing with an increasingly fractured family. And I’m expected to be fully behind lashing £300 million on a yacht that won’t be finished until I’m 99 and I wouldn’t trust myself to stand upright on?

It’s so pathetically transparent. ‘She’d love a luxury yacht that she could meet world leaders on!’ No, you would. You’re jealous of being lobbied by oligarchs on floating palaces and want one of your own.

Have one if you want. If you really believe that other countries are so gullible they’ll sign unfavourable trade deals because they’re floating and the nearest bathroom gold taps. They won’t. I’ve met them. They’re smarter than you.

But don’t make out it’s for me. I could not give a f**k for your tiny-dick yearnings for a yacht. Leave me out of it.