AN oaf who makes no difference to anything was last night targeted by some hippies with no boyfriends.

The angry women dumped a large pile of their own poo onto the oaf's £2m driveway before having their photograph taken while holding up a large sign about the ghastliness of poo.

The hippies say they will continue to dump wheelbarrows full of their own poo in people's driveways unless next month's awareness-raising poo summit in Copenhagen condemns oafs in the strongest possible terms.

The angriest and smelliest of the women said: "We are raising awareness about tomorrow. Every scientist in the world agrees that tomorrow is going to happen, no matter what the oaf writes in the Sunday Times.

"And unless we continually raise awareness between now and tomorrow, that tomorrow is going to be filled with oafs and poo."

She added: "If I can ever pin a man to the floor of my yurt long enough to have children, I want those children to grow up in a world where all the oafs and all the hippies have put their differences to one side and I can go back to using my poo to make jewellery."

But Tom Logan, a man who really, really wants this to stop, said: "I am sick of oafs and I am sick of hippies, especially the smelly female ones who poo everywhere.

"Now, for the love of Christ, would you all please stop shouting at each other and just make an electric car that's not fucking shit."

Only way to save Blackpool tourism is to destroy rest of UK, say experts 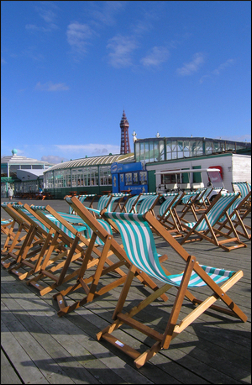 BLACKPOOL’S  tourism industry can be saved if the rest of the United Kingdom is reduced to charred, smouldering rubble, it was claimed last night.

Officials at VisitBritain insist the 25% drop in revenues can be reversed if the RAF bombs all of the seaside town’s rival destinations before the Army is sent in to bulldoze the ruins and release spores of Anthrax.

A spokesman said: “Even so, people will still prefer the smoking, Anthrax-teeming remains of Blenheim Palace until Blackpool does something about the appalling stench and the burnt chip fat that seems to cling to you for weeks after you leave.”

In a recent survey of European travellers, visiting Blackpool was voted 50th on a list of ’50 best things to do in the UK’ finishing well behind  ‘becoming a knife-crime statistic’ and ‘eating the food’.

The town’s tourist officer Elaine Graham said: “This summer we had well over 500,000 European tourists visit us, many of whom would have enjoyed the attractions if they hadn’t been spending 16 hours a day picking whelks.”

The plan for the total devastation of the UK is the latest in a series of tourism boosting strategies including a bold attempt to recreate the famed Pamplona bull run using semi-retired Pleasure Beach donkeys.

Local shop owner Janet Howard said: “Whereas Pamplona tends to attract rich, Ivy League students, we enjoyed a fresh influx of Manchester thieves and smackheads, most of whom ran straight into the sea or simply stole a car.

“Meanwhile the animals stood around shitting and looking confused and then it rained, turning the Golden Mile into a river of liquidised donkey turds.

“It was all very sophisticated.”